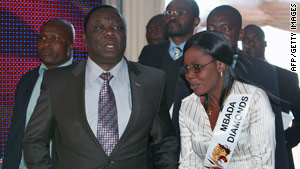 (CNN) -- Zimbabwe launched its first multi-million dollar diamond sale this week since obtaining certification last month that the nation's precious stones are harvested humanely and are not "blood diamonds."

The sale of 900,000 carats of diamonds Tuesday netted some $72 million, according to the Kimberley Process Certification Scheme, which certifies rough diamond exports.

"If this is a victory for anyone, it is a victory for the Kimberly Process," said Kimberly Chair Boaz Hirsch. "The past several months have been difficult, but they have clearly demonstrated that not only does the Kimberley Process have teeth, it also is able to achieve results."

Kimberley had prohibited the export of diamonds from Zimbabwe since last year after the military took over the nation's diamond fields in late 2008.

The Kimberley Process said last year that illegal diamond mining by Zimbabwean troops was leading to bloodshed and attacks against civilians. The global watchdog group made the claims after residents and workers contributed accounts of attacks during a week-long probe.

The probe started days after a Human Rights Watch report accused the nation's armed forces of violently taking over the diamond fields in Marange district and killing about 200 people since last year. Some victims of the clash were buried in mass graves, the report said.

After an investigation last summer, Kimberly Process officials urged the government to demilitarize the diamond fields and investigate the accusations against the military.

Separately, Human Rights Watch accused Zimbabwe's armed forces of funneling money from the diamond fields into ZANU-PF, President Robert Mugabe's party. The government decried some aspects of the report, saying the critics were trying to smear the Mugabe's party.

"I can confirm that there has been illegal mining taking place in Zimbabwe, but we seem to be getting on top of the situation now," Kembo Mohadi, Zimbabwe's co-minister of home affairs, said at the time.

The government has not been able to verify allegations of deaths and mass graves, Mohadi said.

"As a responsible government, we have started investigating these reports," he said, adding that mining proceeds in the cash-strapped nation are not being distributed to any particular group.

"The money will not be handled by any party but by the Treasury," he said.

Blood diamonds have been in the news in recent weeks because of the trial of former Liberian President Charles Taylor, who is accused of fueling a bloody civil war in neighboring Sierra Leone through the sale of diamonds that led to widespread murder, rape, and mutilation. The conflict ended in 2002.

In 2002, a United Nations-backed court was established in Sierra Leone to try Taylor on war crimes charges. It was later moved to The Hague in 2008 over concerns that Taylor's presence would harm stability and security in the region.

Under the Kimberley Process -- launched in 2003 -- members are required to certify that all rough diamond exports are produced through legitimate mining and sales activities and are "conflict-free."