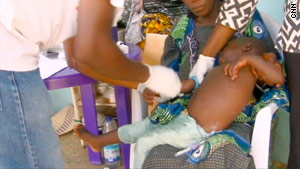 Children are dying of lead poisoning in Nigeria according to the aid group Doctors Without Borders.
STORY HIGHLIGHTS

(CNN) -- As many as 400 children have died of lead poisoning-related illnesses in Nigeria since March, two international aid groups say, and as many as 30,000 people could be affected by lead contamination.

The deaths occurred predominantly in children under the age of 5 in the state of Zamfara, according to Lauren Cooney, the emergency manager for Medecins Sans Frontieres. The group is also known by its English name, Doctors without Borders.

Cooney told CNN Tuesday that the death toll may be even higher, but said the numbers shouldn't mask the crisis.

"Rather than focus on specific death toll numbers, because those often are very difficult to obtain, the international community should focus on the harsh reality in Nigeria: It is very clear that a serious and significant number of children have died due to lead poisoning," she said.

A study conducted by the World Health Organization and the Health Ministry of Zamfara State "identified 180 villages where children may have been poisoned by lead, which means that up to 30,000 people could be affected," said a statement Friday from the United Nations' Office for the Coordination of Humanitarian Affairs.

The report on child deaths comes a few months after the Nigerian government announced in early June the deaths of more than 160 Nigerians, including scores of children, of lead poisoning due to illegal gold mining.

"The lead poisoning is a consequence of villagers practicing small-scale gold extraction from lead-containing ore. The processing of the ore involves crushing and drying, often inside the homes of villagers, resulting in the contamination of soil," Doctors without Borders explained in a statement.

Since June, Nigerian health officials have cooperated with the World Health Organization to clean up the affected areas. Since the process began, two out the seven villages known to be affected have been decontaminated, Cooney said.

"We already started in June treating patients. We are focusing on treatment of children under 5 but the most important thing is the remediation, or clean-up, so the exposure can stop," she added.

Remediation is a lengthy process that requires removing all the contaminated soil and replacing it with clean soil. The process was stopped in the month of August due to the beginning of the rainy season but it started up again a few weeks ago.

Efforts to clean up contaminated areas are being hampered by the reluctance of villagers to report potential lead exposure, for fear the Nigerian government will prohibit the informal gold mining, OCHA said.

Doctors without Borders says it's still treating hundreds of lead-poisoning cases in Zamfara, but the group warned that the treatment is only effective if patients do not return to contaminated sites.