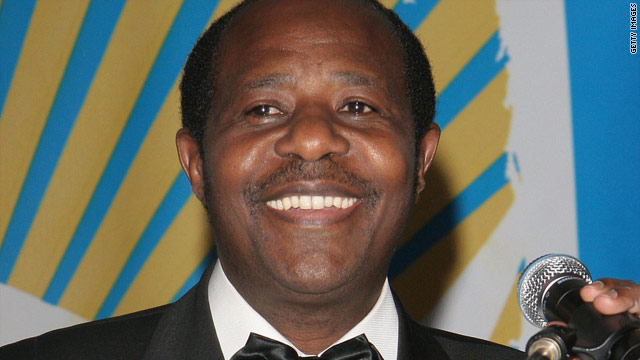 Paul Rusesabagina is credited with saving hundreds in the 1994 genocide in Rwanda.
STORY HIGHLIGHTS

(CNN) -- A man depicted as a hero in the movie "Hotel Rwanda" on Thursday slammed accusations by Rwandan authorities that he helped fund a rebel group.

Paul Rusesabagina's efforts to save hundreds during the 1994 genocide are depicted in the Oscar-nominated movie starring Don Cheadle.

He wired large sums of money from San Antonio, Texas, to commanders of the Democratic Forces for the Liberation of Rwanda, the prosecutor said. The rebel group is known by its acronym, FDLR.

Ngoga said he plans to file formal charges, and is pushing the United States to be part of the investigation because of the funds' origin.

"We would have preferred if the U.S. is involved to give the case the credibility it needs," he said. "We are talking about someone financing terror ... this is not the time for the U.S. to play double standards."

The prosecutor said he has evidence that the money was sent to banks in Congo, Tanzania and Burundi.

This is pure and simple fabrication from Kigali.
--Paul Rusesabagina
RELATED TOPICS

Transactions have been confirmed by top rebel commanders who are in custody, Ngoga said.

Opposition leader Victoire Ingabire, who is in custody, was collaborating with the former hotel manager, the prosecutor said.

Rusesabagina denied the accusations, calling them a "baseless" attempt by the government to tarnish his reputation.

"I have sent no money to terrorists ... He [the prosecutor] is not only lying, but lying with bad logic," he told CNN from Brussels, Belgium, where he's living in exile. "This is pure and simple fabrication from Kigali."

The former hotel manager is a major critic of Rwandan President Paul Kagame. He has accused the government of human rights abuses and silencing critics.

"This is Kagame trying to clean all the bushes around him," Rusesabagina said. "He has silenced all his critics, some are in prison and some have been killed. I am the only person remaining."

But Ngoga denied the accusations are politically motivated, saying the government has a duty to act in "terror" cases.

Rusesabagina is credited with saving hundreds in the 1994 genocide that killed more than 800,000 Tutsis and moderate Hutus in the central African nation.

The White House awarded him the Presidential Medal of Freedom in 2005 for his heroism during the genocide.