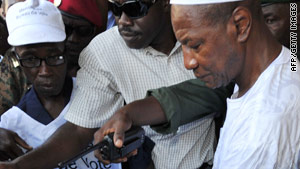 Alpha Conde (right) casts his vote on November 7 at a polling station in Conakry, Guinea.

Conakry, Guinea (CNN) -- Alpha Conde said Monday in a speech to supporters at his home that his victory in last week's presidential runoff will result in "a new era" for Guinea.

"Tonight marks a new era for our country, the hour of change that millions of Guineans have strived for years to achieve," he said in a victory speech in the Mafonco neighborhood of Conakry.

He delivered the speech shortly after the president of the Independent National Electoral Commission declared he was the victor in last week's tightly contested presidential election, the first in the West African republic's 52-year history.

Outside Conde's residence, hundreds of cheering supporters surrounded his house in jubilation. About eight soldiers who made up his security contingent fired their AK-47s into the air in celebration.

The announcement capped a day of violence in the capital city of Conakry during which supporters of Conde and challenger Cellou Dalein Diallo claimed victory in the November 7 runoff election.

Shortly after Conde declared he had won, Diallo said he was the winner. In the melee that followed, security forces fired on supporters of Diallo in the Bambeto area of Conakry, killing three people, a spokesman for the military police said.

Gunfire could be heard throughout the day as demonstrators set tires afire in an attempt to block roads and threw stones at security forces armed in riot gear as they patrolled the streets in pickup trucks.

The forces fired tear gas and live ammunition against demonstrators, many of them boys who had thrown stones and then retreated into buildings.

Though most of the streets were open, most of the stores were closed on Monday, a day before a Muslim holiday, when shoppers would typically be out in force stocking up on foodstuffs.

The U.S.-based Carter Center and a European Union election group both monitored last week's election and said they had found no major problems.

"The successful voting process is an overwhelming testament of Guineans' profound desire to express their will at the ballot box and to complete their historic democratic transition."

U.N. Secretary-General Ban Ki-moon urged Guineans to "accept the results ... and resolve any differences through legal means." In a statement, he said the republic had the United Nations' full support, and urged individual countries "to provide Guinea with concrete support as the country embarks on a new phase towards peace, consolidation and development."

But supporters of Diallo said voter fraud was widespread, with more ballots cast in certain areas than there were people registered to vote. In other cases, they said, they had evidence that ballots that had been filled out at the polling places differed from the ballots that were submitted to the central counting location in Conakry.

Violence surrounding the election has an ethnic dimension: Conde is an ethnic Malinke and Diallo a Peul.

The election results had initially been due last Wednesday, but Gen. Siaka Toumani Sangare, who heads the Independent National Electoral Commission, said he was delaying them to give time to consider election complaints that had been posed by both sides.

Early results showed many Guineans voted along ethnic and regional lines, with the ethnic Peul, also known as Fulani, supporting the Peul candidate, Diallo, and the Malinke strongly in favor of their candidate, Conde.

As winner, Conde will get unparalleled access to lucrative mining contracts for the ruling party.

In the past, Guinean presidents have favored their own ethnic groups, which is why many have openly worried that their community would be shut out of the resources if they lose.

But others were more hopeful that Guinea's democratic transition from the military junta that took power in 2008 would take place peacefully.

"The Guinean population from all the regions has witnessed war in the neighboring countries and has received displaced people, and I don't think they want to be in that position," Mamadou Camara, a computer engineer in Conakry, told CNN Thursday.