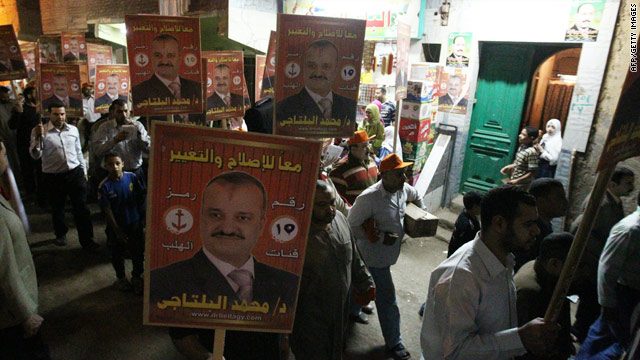 This is the Muslim Brotherhood's prime constituency, where needs are greatest, and often ignored. But earlier this week, Mohamed Beltagy was hitting the streets in this district in northern Cairo, Egypt.

The lawmaker is defending his seat in parliament -- and wasting no time before voters head to the polls in Sunday's elections. He shook hands with men he met in sidewalk cafes and waved to women selling vegetables in the street.

Beltagy is a member of the Muslim Brotherhood, Egypt's largest opposition bloc, but he's running as an independent, because the Brotherhood is illegal according to Egyptian law, which bans parties based on religion.

The Brotherhood's candidates made stunning gains in elections five years ago, winning a fifth of the seats in parliament.

This time around, the ruling National Democracy Party is confident of rolling back those gains. And critics say the authorities are using all means to make sure their opponents are cut down to size.

Since 2005, a raft of constitutional amendments have been enacted strengthening the hand of the ruling party.

"Thirty-three articles of our constitution...have rendered Egypt a police state, a constitutional police state, allowing for more interference and suppression by the government, and creating a political environment that is very oppressive," independent election monitor Ghada Shahbandar said.

Earlier this month police and Muslim Brotherhood members violently clashed at a rally in Alexandria, where witnesses said police used tear gas and rubber bullets to disperse the crowd.

While Egyptian authorities have not confirmed the total number of arrests in recent weeks, Muslim Brotherhood officials say more than 1,200 of their members and supporters have been arrested.

Amnesty International has accused Egyptian authorities of silencing critics in the runup to the elections. And Reporters Without Borders has condemned what it calls "an increase in measures to control news and information and suppress freedom of expression" as the election nears.

But independent election monitors claim elections are anything but that -- noting that elections in Egypt are often characterized by vote-rigging, intimidation and violence.

For all these reasons, and more, Wael Nawara's liberal Al-Ghad party is boycotting the vote.

"The Egyptian people are sick of this game. They want a real political process, a process whereby the outcome of the process comes from the process itself, not an outcome that's designed in one office, and then the process is manipulated to reproduce that result," he said.

About 800 candidates from the ruling party, 250 from the liberal al-Wafd Party and 130 from the Muslim Brotherhood are running for the parliament's 508 seats.

The Muslim Brotherhood's Issam Aryan said his party would have won many more seats in the 2005 elections if government intimidation had not stood in the way. These elections will also be crooked, he said.

"In every election we are hearing the same statement, that we are having a free and fair election, and finishing the election, we know that it was rigged. It was a fraud it was a big lie," he said.

Analysts expect that many of the seats currently occupied by members of the opposition Muslim Brotherhood will go to the liberal Al-Wafd party after Sunday's elections.

Amr Shobaki, an expert at the Al-Ahram Center for Political and Strategic Studies, told CNN that the Muslim Brotherhood will fail to maintain seats because "the government is strangling them -- politically. In addition, they failed to gain the trust of people and lack of good performance at parliament."

Egypt has rejected any international monitoring of the elections as interference in its internal affairs.

The National Democratic Party website says the party has recruited 86,000 representatives to monitor polling stations and assess the turnout of members and "appointed 10,000 officials tasked with transporting party members to polling stations."

But Beltagy said earlier this week that none of his supporters had been given police permission to monitor voting in the elections. At first, when he went to police headquarters to lodge a complaint, police locked the door.

Beltagy and his lawyers were finally allowed in. And police told them their request would be reconsidered.

But he said the worst from the government and its backers may be yet to come.

"We're afraid that on voting day, they'll use thuggery and weapons against our people and our supporters," he said. "We shall see what happens on Sunday."