Study: Africa can feed itself in a generation 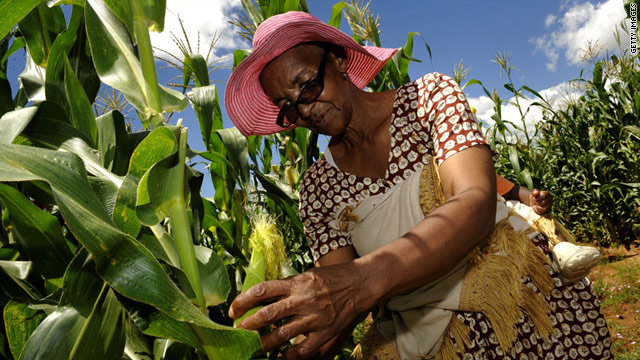 Prioritizing agriculture could make Africa a food exporter, according to a new study.
STORY HIGHLIGHTS

(CNN) -- Africa could be able to feed itself in a generation, says a new study being presented to five African presidents Thursday.

Currently a net food importer, Africa has the potential to become a food exporter through a combination of modern technology, improved infrastructure and better technical education, according to the study.

Calestous Juma, professor of the practice of international development at the Harvard Kennedy School in the United States, led the research, which was funded by the Bill and Melinda Gates Foundation.

"Seventy percent of employment in Africa comes from agriculture, so you can argue that in Africa agriculture and economy are synonymous," he said. "In effect, you cannot modernize the economy in Africa without starting with agriculture."

According to the study, a lack of investment means food production in Africa has fallen 10 percent since 1960, and production levels are so low that one third of sub-Saharan Africans are chronically hungry.

Technology is key to powering an agricultural revolution, according to Juma. He says modern communications are essential for farmers to keep abreast of changes in market prices and weather conditions.

He also suggests biotechnology, including genetically modified (GM) seeds, will become increasingly important in improving agricultural yields and in mitigating the effects of climate change.

"South Africa, Burkina Faso and Egypt already have GM crops and we expect in the next few years Kenya and Tanzania to follow suit," said Juma.

"In the cotton industry, people couldn't afford pesticides and now suddenly you have new seeds that don't require use of pesticides or use a lot less pesticides. That's starting to make cotton production commercially viable.

"There is also the prospect of growing drought-tolerant crops, especially drought-tolerant corn, because corn is very widely consumed in Africa. This may not lead to large expansion of corn production, but it may mean that corn can be grown in areas that are drier, possibly as a consequence of climate change."

But it's vital that any prioritization of agriculture is not at the expense of the trade in raw materials, according to Ousmane Badiane, Africa director for the International Food Policy Research Institute.

"I would not like to look at agriculture as a different path to growth than raw materials in a country that has both," he said. "The two are not alternatives or substitutes -- one would look for the synergy between the two."

But Badiane agreed that while some African nations are likely to remain net importers, Africa's improved economic performance over the last 10 to 15 years indicates many African countries do have the potential to become net exporters of food.

As well as recommending improved infrastructure and the creation of new enterprises in areas such as farm mechanization and food storage, the study also suggests the recognition of agriculture as a knowledge industry.

"Growing crops is a lot more complicated than just digging up diamonds in the ground. You have to know about ecology and weather patterns, you have to breed plants and maintain infrastructure. It will present an improvement in the technical base of Africa."

Juma will present his findings to the presidents of Tanzania, Kenya, Uganda, Rwanda and Burundi at a meeting in Arusha, Tanzania, and he thinks they will be receptive to his findings.

"We are approaching them in the direction they would like to be going, and they are already going in the first place, so it doesn't take a whole lot of pushing," he said.

"The political will part is not an issue any more -- the real challenge is moving towards implementation."