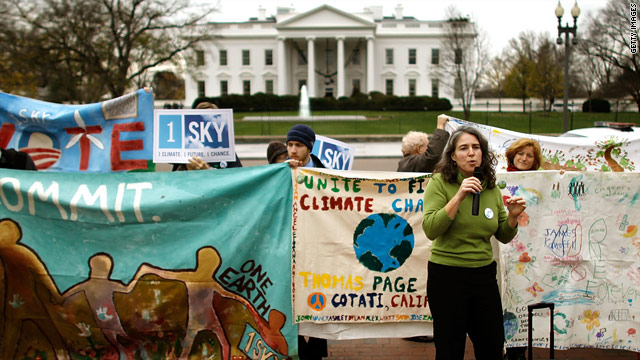 Fewer Americans are concerned about climate change than they were in 2008 according to a report.
STORY HIGHLIGHTS
RELATED TOPICS

(CNN) -- Public concern about global warming and trust in climate leaders has dropped sharply in the U.S. according to a survey.

Fifty-seven percent of Americans polled at the end of 2009 and early 2010 believe climate change is happening compared with a figure of 71 percent in October 2008.

The report, "Climate Change in the American Mind" published jointly by Yale University and the George Mason University Wednesday also reveals a picture of falling trust in scientists, politicians and the media concerning climate change.

Anthony Leiserowitz, principal investigator and director of the Yale Project on Climate Change told CNN: "I'm not surprised by the direction of the results but I am surprised at the magnitude of them.

"These are steep drop offs and this is despite the fact that, if anything, the climate science is getting stronger and more concerning over the past year."

Over 1000 American adults were interviewed for the report. Respondents answered questions on a range of climate change issues including rating their trust of public institutions and climate leaders as a source of information.

Trust in scientists dropped nine percent from 83 to 74 percent, while faith in the mainstream news media slumped from 47 percent in 2008 to 36 percent.

Along with the media, Al Gore experienced the biggest fall in trust according to the survey. In 2008, 58 percent of respondents said they "strongly trust" or "somewhat trust" the former vice president and climate activist. In 2010 that figure has fallen to 47 percent.

Leiserowitz thinks this widespread decline in support is down to two main factors.

"Clearly the economy is dominating all issues right now. People in the U.S. are, frankly, afraid and they're angry at Washington, Wall Street and elected officials who don't seem to be responding. As a result the climate has gone down in public priority," Leiserowitz said.

"But I think also in the past few weeks and months some really troubling stories have been reported around climate science," he added.

Leiserowitz points to the damage caused first by the so-called "Climategate" scandal in November 2009 which was seized upon by climate skeptics who argued scientists have been suppressing data.

And more recently concerns surrounding parts of the Himalayan glacier data published in the 2007 report by the Intergovernmental Panel on Climate Change.

"They [climate skeptics] have taken these as opportunities to drive home their particular message, and I think they've been successful."

What this all underlines, Leiserowitz says, is the need to educate the American people.

"There is a real need for improved public education and communication on this critical issue. The science is getting stronger and public opinion is going in the opposite direction."