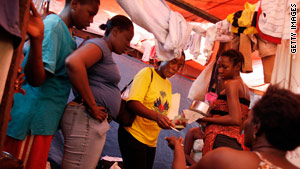 Port-au-Prince's Champ de Mars, a camp made up largely of tents, is home to an estimated 16,000 people.
STORY HIGHLIGHTS
RELATED TOPICS

Port-au-Prince, Haiti (CNN) -- The Haitian government has launched a new effort to thin out the tent cities around Port-au-Prince that are home to hundreds of thousands of people displaced by last month's earthquake.

Authorities are registering residents of the camps and determining whether their homes can be rebuilt.

"If the home has been damaged, teams will be sent to remove the rubble, or a structural engineer will be sent to see if it can be fixed," said Mark Turner, spokesman for the Organization of International Migration, which is assisting in the effort.

If their homes can be repaired or rebuilt, tent city residents will be sent home to get to work. Where rebuilding is impossible, the government will encourage those in temporary settlements to move in with relatives or friends.

The effort represents a turnabout from the Haitian government's earlier strategy of building mass camps for those who lost homes in the January 12 earthquake.

That strategy was faulted for creating public health risks and for cutting inhabitants off from their livelihoods in Port-au-Prince. In addition, much of the land in and around Port-au-Prince is privately held, with landowners reluctant to loan or sell their property to the displaced.

Those who must remain in the camps can expect the government to organize and sanitize the settlements, according to the Organization of International Migration.

The government strategy for shrinking Haiti's tent cities coincides with a new U.N. effort to clear rubble from the country's residential properties and entice people from temporary settlements back home -- even if their homes have collapsed. The United Nations says it's preferable to have people living in tents on their own land than in sprawling encampments.

Haiti has 415 temporary settlements housing roughly 550,000 earthquake victims, according to the Organization of International Migration.

The push to thin the camps was provoked by the approach of Haiti's rainy season, which could start as soon as mid-March. The government-led effort got under way Tuesday, focusing on the most overcrowded camps first. Of the 415 camps, just 21 house 40 percent of Haiti's displaced population.

On Tuesday, Organization of International Migration workers fanned out through Port-au-Prince's Champ de Mars, home to an estimated 16,000 people, distributing color-coded coins that residents will use to begin the registration process.

The Champ de Mars effort is a pilot program for a broader effort throughout Port-au-Prince.