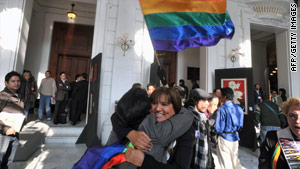 The Mexican Institute for Sexology, a private educational institution founded in 1979, held a workshop last month for the 60 Civil Registry judges who will perform the weddings, said Juan Luis Alvarez-Gayou, the institute's founder and director. Workshops are being held this week for 120 civil court judges who may have to rule on domestic issues after the weddings, Alvarez-Gayou said.

The Catholic Church has been opposed to the law, but officials have accepted the measure, the institute director said.

"We haven't had any problems with the judges," Alvarez-Gayou said.

The Mexico City law comes amid the beginning of wider acceptance for same-sex unions in Latin America.

In Argentina, Damian Bernath and Jorge Salazar were married Wednesday in a civil ceremony in the nation's capital, Buenos Aires, the official Telam news agency reported. Judicial measures had prevented gay marriage in Buenos Aires, but a judge issued a ruling last week allowing the two men to marry.

It was the second same-sex marriage in Argentina. The previous wedding took place in Tierra del Fuego after two men were denied a permit in Buenos Aires.

In that case, a Buenos Aires court had ruled that a ban on same-sex marriage was illegal and ordered the proper authorities to grant the couple a marriage license if they applied for one. On the eve of their December 1 wedding, however, another court filed an injunction, halting the nuptials.

In many Latin American jurisdictions, the issue of same-sex marriage is decided on the local and state level.