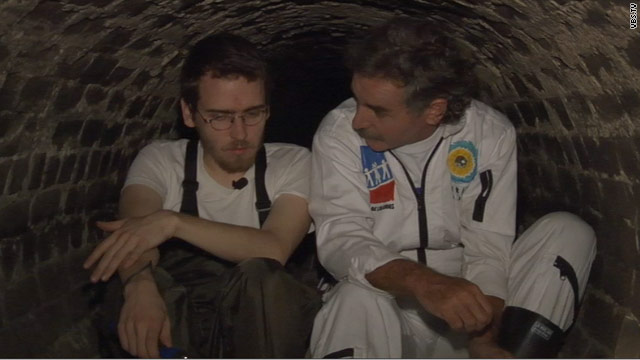 Editor's note: The staff at CNN.com has recently been intrigued by the journalism of VICE, an independent media company and Web site based in Brooklyn, New York. VBS.TV is the broadband television network of VICE. The reports, which are produced solely by VICE, reflect a transparent approach to journalism, where viewers are taken along on every step of the reporting process. We believe that this unique reporting approach is worthy of sharing with our CNN.com readers. Viewer discretion advised.

Brooklyn, New York (VBS.TV) -- The first time I heard anything about people living in the sewers in Colombia was back at the beginning of the '90s. The sewage system running under Bogota's streets was filled with packs of kids living waist-deep in human waste and taking in copious amounts of glue and crack in order to cope.

This was at the height of Colombia's Dirty War, and the whole reason street kids had moved into the sewers in the first place was to get away from the violence above ground. But then the paramilitary death squads who had chased them off the street started coming into the pipes and shooting them or dousing them in gasoline or raping them.

The sewer kids became a fairly big humanitarian story in the media for a while, with networks in America and Europe sending in TV crews to cover it and folks setting up charities abroad. Then, as happens with news stories, it fell off the radar, and I guess people kind of thought the problem had been resolved, if they thought of it at all.

But what had actually happened was, about six months after all the stories aired, the death squads went in, armed with the whereabouts of the sewer-kid hot spots, and carried out massive reprisal killings. There was some talk in the government about cracking down on the death squads, but by all accounts, soldiers and off-duty cops made up a good part of most squads. So the situation just stagnated while the world turned its attention elsewhere.

See the rest of Sewers of Bogota at VBS.TV

When we went into the sewers and started talking to people, nobody wanted to be anywhere near our camera. Having heard stories about the last time cameras came down, they were all sure that the police would figure out where they were hiding from our footage and come in to beat the (expletive) out of them (the fact that they were all cracked out of their skulls probably didn't help with the paranoia either).

We took great pains to obscure the locations of their homes, but the only reason any of them talked with us was because we went down with Jaime Jaramillo.

We had mixed feelings about Jaime, or "Papa Jaime" as he prefers to be called, when we met him. He was constantly mugging for the camera and repeating the same well-rehearsed speeches about the kids' living conditions ("Their only food is trash, their only music the honking of the city bus ..."), calling us at our hotel when he's on the local news, etc.

The thing is, though, he is seriously one of the only people in the country who's done anything about the situation in the sewers. We all snickered at the meditation tapes and the Evel Knievel jumpsuit, but once we got down into the pipes, not only did all the kids know and trust him, they ran to him like he was made out of crack.