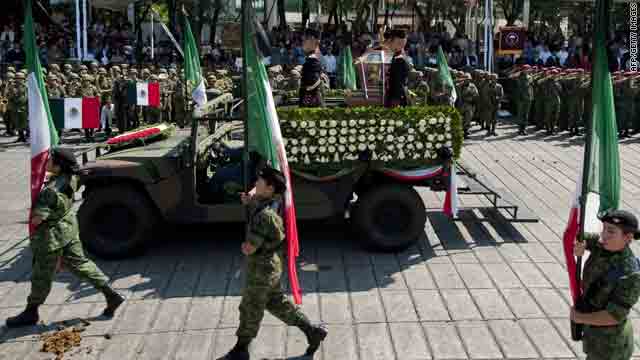 Soldiers in Mexico City escort a truck carrying the remains believed to include Miguel Hidalgo and seven other heroes on Sunday.
STORY HIGHLIGHTS
RELATED TOPICS

Mexico City, Mexico (CNN) -- Experts are examining the exhumed remains of men who fought for Mexico's independence as part of the country's bicentennial celebration.

The skulls and bones of a dozen historical figures were removed from a crypt in Mexico City's Angel of Independence monument in a somber ceremony Sunday and paraded in glass caskets through the streets.

Members of the military escorted them to a temporary laboratory, where experts will study them to verify their identities and ensure their conservation, according to a statement on the Mexican government's Web site.

They will be taken to the National Palace for an exhibit after the investigation, Mexican President Felipe Calderon said, "so that all of us Mexicans can pay homage to them in this year of the fatherland."

The skull of Miguel Hidalgo, a priest whose cries for revolt began Mexico's independence fight, is thought to be among the remains.

Mexico is celebrating the 200th anniversary of the beginning of its fight for independence from Spain this year.