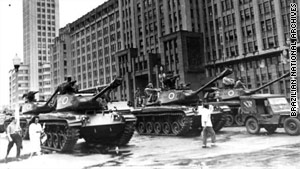 This photo from 1964 shows a scene from a military takeover Brazil. Tanks and soldiers move into Rio de Janeiro.
STORY HIGHLIGHTS
RELATED TOPICS

(CNN) -- One of South America's largest historical archives -- 35 million pages that chronicle widespread killing, forced disappearances and torture committed by Brazilian military rulers from 1964 to 1985 -- is rotting away in an obscure government building in Brazil's capital.

Fico -- who has led an academic commission to study classified documents relating to that era -- said Brazil's government suddenly made a large amount of classified documents available to the public. That resulted in an avalanche of military documents that have now been jammed into every corner of the government archives building, including bathrooms.

As court orders continue to force military jurisdictions throughout Brazil to send in their documents, the building cannot handle the load, Fico told CNN. And, left unattended, the papers are rotting.

"I have been to the building in Brasilia and I can tell you that it was not made for archiving documents," he said. "There are some serious implications in terms of fire threats and the amount of history being stored there in the last eight years."

Eight years ago, victims' rights groups and academics successfully sued for access to classified documents from the years of military rule in Brazil, a period known for covert military operations against civilians who were deemed subversive to the right-wing military. Many suspects who ran afoul of the military rulers often were punished with torture and many people disappeared.

The Brazilian archive, growing but perishing rapidly as victims' group seek greater access to information, contains details ranging from Brazil's role in the overthrow of the government of Chilean leader Salvador Allende in 1973, to dealings between the United States government and the Brazilian junta, to the vast spying network on artists and the media, Fico said.

"We already know a lot about U.S. involvement, but the most important part of these documents is regarding the ... repressive activities conducted by the Brazilian military as it collaborated with neighboring countries," said Fico.

The Brazilian archives shed light on the role of Brazil's leadership in collaborating with neighboring military rulers who, according to human rights observers, committed serious human rights abuses against innocent civilians.

"The preservation of these documents is important to our history and is crucial to victims' families who are seeking the truth and some form indemnity for their missing loved ones," said Fico.