New Colombian president sworn in, vows peace 'by reason or by force' 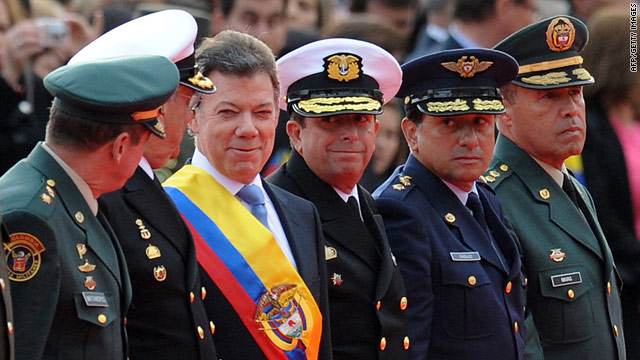 (CNN) -- Juan Manuel Santos was sworn in Saturday as Colombia's new president, vowing to unify his country around the goals of prosperity for all and of thwarting the nation's leftist rebels.

"It is possible to have a peaceful Colombia, a Colombia with no guerrillas, and we will prove that by reason or by force," Santos said in Bogota in his first televised remarks as head of state.

Earlier in his speech, Santos vowed to "preside over a government of national unity."

"The priority, the obsession of my government, will be to generate prosperity for society through the creation of jobs," he said.

In an early test of Santos' diplomatic skills, his inauguration was attended by the foreign minister of Venezuela, which is at odds with Colombia over accusations that Colombian rebels have found refuge in Venezuela.

The priority, the obsession of my government, will be to generate prosperity for society through the creation of jobs.
--Colombian President Juan Miguel Santos
RELATED TOPICS

In a speech later on Saturday, Chavez said that Maduro will meet with his Colombian counterpart in Bogota on Sunday.

Chavez also said that he wants to meet with Santos.

"I invited Santos to go to Caracas," Chavez said, referring to Venezuela's capital. "If he can't come, I'll go to Bogota."

"But I am telling you," Chavez said at another point in the speech, "the first disrespect to Venezuela, the first false accusation, and everything will be over."

Santos was elected president of Colombia in June with the highest vote total in his country's history, garnering more than 9 million ballots, roughly 70 percent of the electorate. He ran as a conservative promising to improve Colombia's security.

Some of the strongest strikes against the Revolutionary Armed Forces of Colombia, or FARC, came under Santos' leadership as minister of defense, including the high-profile hostage rescue of former presidential candidate Ingrid Betancourt in 2008.

"We have been tough on terrorism and we will be even tougher now," Santos said at a victory celebration in June.

"We are very optimistic. We must move forward," Chavez said, according to the state-run Agencia Venezolana de Noticias.