Mexican officials: Gunmen behind massacre of 72 have been killed 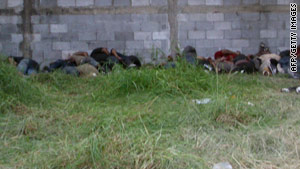 The killings of 72 migrants in Mexico in August have been a particularly gruesome incident in nation plagued by violence.
STORY HIGHLIGHTS

(CNN) -- Six of the suspected gunmen responsible for the killings of 72 migrants in Mexico have been identified, Mexican authorities said Monday, the state-run Notimex news agency reported.

However, all of the suspects are dead, said Alejandro Poire, the spokesman for Mexico's president on security issues.

Three were killed in a confrontation with the Mexican navy after the bodies were discovered, and three others were found dead inside a vehicle on the side of a highway, Poire said

The dead suspects were identified by the survivors of last month's massacre at a ranch near the town of San Fernando in the northeastern state of Tamaulipas.

Three people are believed to have survived the mass killings, although only one -- an Ecuadorean man -- has spoken publicly. Mexican authorities have withheld details about survivors, citing safety concerns.

A seventh suspect was arrested and is being held by authorities while they investigate possible charges against him, Poire said.

Of the 72 migrants who were killed, 27 had been identified and their bodies returned to their home countries in Honduras and El Salvador, he said.

The official said the preliminary investigation shows that the Zetas drug cartel was responsible for the killings.