Mexican journalists shot Thursday may not have been intended targets 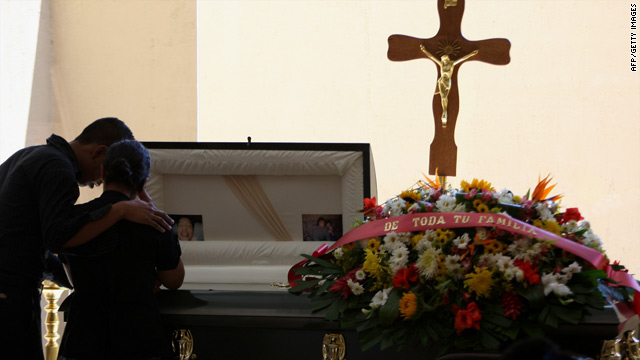 Mexico City, Mexico (CNN) -- The Chihuahua attorney general's office said Friday it is investigating whether the car in which two photojournalists were shot Thursday in northern Mexico belonged to a human-rights activist who may have been the intended target.

A photographer for El Diario newspaper in Ciudad Juarez was gunned down Thursday, the paper said on its website. A second photographer was wounded in the shooting.

Luis Carlos Santiago, 21, was declared dead at the scene. He and his 18-year-old co-worker, Carlos Manuel Sanchez, were inside a silver Nissan sedan in the parking lot of a shopping mall, the newspaper said. Santiago was in the driver's seat.

Unidentified gunmen followed the pair to the Rio Grande Mall, near the newspaper's offices, a source with knowledge of the investigation told CNN.

At 2:20 p.m., the gunmen -- who were in a compact gray car -- opened fire, killing Santiago, the newspaper said, citing witnesses. Despite having been struck in the chest and arm, Sanchez got out of the car and entered the mall, the newspaper said. The gunmen continued firing, without striking him again, then left, it reported.

The wounded journalist was taken to a hospital in stable condition, the official said.

The journalists were using a car that belongs to an attorney and human-rights activist, Gustavo de la Rosa, who lives in the United States, said Arturo Sandoval, a spokesman for the Chihuahua attorney general.

Officials were investigating whether the elder de la Rosa was the intended target, he said.

Ciudad Juarez is one of the deadliest cities in Mexico, with 2,185 killings since January 1 and the country is one of the most dangerous for journalists. Much of the violence stems from turf wars between rival cartels and battles between the cartels and the Mexican authorities.

The source said it was not clear whether Thursday's killing was related to drug violence.

Santiago is the ninth journalist killed in Mexico this year, according to the Committee to Protect Journalists.

Drug cartels pressure journalists and editors in Mexico to avoid reporting on them and to print unflattering stories about rival drug cartels. The result has been increasing self-censorship from many media outlets throughout the country.

Press freedom organizations say Mexico does not do enough to investigate the killing of journalists.

A recent CPJ report found "systemic failures that, if left unaddressed, will further erode freedom of expression and the rule of law. Vital national and international interests are at stake."