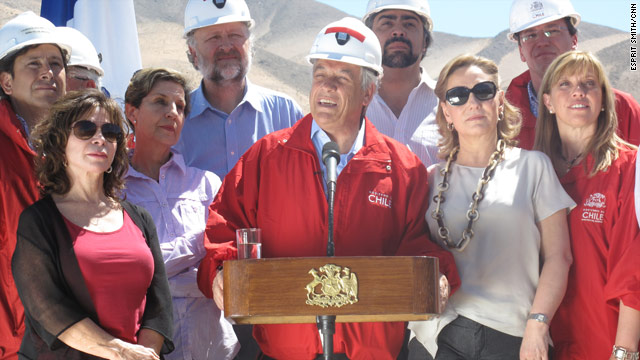 Copiapo, Chile (CNN) -- Some of the families camped outside the San Jose mine, waiting for rescuers to reach 33 workers trapped underground, fear Chilean President Sebastian Pinera may be playing politics with the rescue operation in an effort to boost his popularity.

Pinera visited the mine Sunday and spoke with the trapped workers. He also presented their families with a copper plate engraved with the words miners first used to tell rescuers they were alive, "We're fine, in the shelter, all 33."

"This is all politics. It's dirty. It's trickery and propaganda. They're playing with the feelings of our loved ones," said Nelly Bugueno, mother of trapped miner Victor Zamora.

The mine rescue appears to have boosted Pinera's popularity at a time when he was under fire in other parts of the country.

In the south of Chile, Pinera is battling a hunger strike by 34 Mapuche Indians, part of the indigenous group's ongoing campaign for independence.

Along the central and southern coast, some Chileans accuse the government of being too slow to rebuild after the February earthquake and tsunami.

But his overall approval rating surged to 56 percent in August, according to a survey by Adimark GfK, a 10 percent increase over the July numbers. The Chilean research company said the increase was "directly related with the rescue operations of the trapped miners in the San Jose mine."

When the workers first sent word that they were alive, Pinera triumphantly waved their written note before television cameras. Sunday was his fifth visit to the mine.

Outside the mine Sunday, some family members said they were angry that the rescue effort was being turned into a political spectacle.

"We know politicians want to show off, but I don't care about the politics. All I care about is that the president gets our boys out," said Cristina Nunez, wife of miner Claudio Yanez.

The sister of another trapped miner accused rescuers of delaying the switch-on of a recently-assembled oil rig -- the so-called Plan C drill -- until Pinera arrived Sunday.

She also claimed rescuers discovered the miners were alive in an underground shelter in the early hours of August 22, but waited until midday to officially announce the news, after Pinera arrived at the mine.

She declined to be named for fear of losing her job for anti-government comments.

"We're still not free in Chile to speak our mind," she said.

Another woman, the wife of one of the miners, said families were sometimes not given information in a timely fashion. The woman, who asked not to be named for fear of unspecified reprisals, said she did not bother to wait in the hot sun to meet the president Sunday.

"I got tired of waiting and I'm bored of the way he's doing things. The mining minister and the rescuers have done a good job, but the president is playing with us," she said.

Not all relatives, however, felt frustrated by political overtones in the rescue effort.

"We have to be calm. God works on his own schedule and we have to wait patiently," said Eli Steger, daughter of trapped miner Jose Ojeda.

The president arrived at the mine at midmorning Sunday, flying in on a military helicopter that landed in the desert, kicking up dust. He spent about an hour and a half at the mine.

He met 5-day-old Esperanza Ticona, the daughter of Ariel Ticona, one of the trapped miners -- and kissed her in front of television cameras. Esperanza was brought to the mine for the first time Sunday by her mother, Elizabeth Segovia.

"Hopefully this spirit of unity, faith, confidence and pride to be Chilean that is in the air at the San Jose mine and in every corner of Chile is a spirit that will illuminate this third century of independence," Pinera said, referring to Chile's recent bicentennial celebration.

Away from reporters, Pinera first visited a powerful oil drill that has been transported to the mine to assist in the rescue. The drill, known as Plan C, began operating Sunday. Mine experts say it could be the fastest way of punching through rock a hole that is wide enough to hoist the miners back to the surface.

Sunday was the first day that all three drills were working simultaneously, Pinera said.