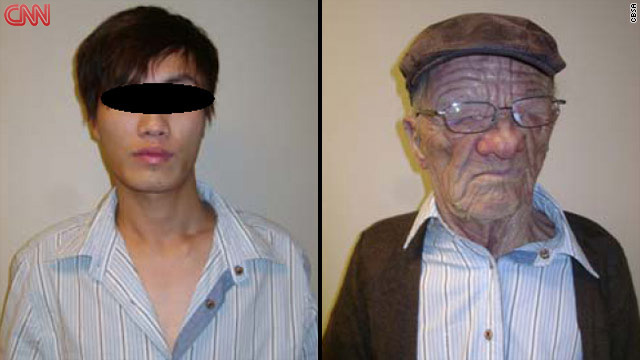 An Asian in his 20s boarded an Air Canada flight disguised as an elderly man, the Canadian Border Services Agency says.
STORY HIGHLIGHTS

(CNN) -- The man who disguised himself as an elderly passenger on an Air Canada flight is an "ordinary citizen" from China who probably used a smuggling ring to obtain false documents and arrange the plan, his lawyer said Monday.

"There is a worldwide network of people who make their living smuggling people to other countries and that appears what occurred here," Lee Rankin, a Vancouver, British Columbia, immigration attorney told CNN.

The man, an Asian in his early 20s, boarded the Air Canada flight from Hong Kong on October 29 wearing an elaborate head mask of an elderly man, according to a confidential alert that had been issued by the Canadian Border Services Agency. He took off the disguise in a restroom during the flight, and was met by Canadian authorities after the plane landed in Vancouver.

The man, who requested refugee protection, was being held in a Vancouver jail pending an immigration hearing Monday, Rankin said.

He said the man, whose name has not been disclosed, is from a rural area in Fujian, which is in southeast China. Rankin, who was appointed by the court to represent him, said he spoke with him in jail last week.

"This is the scenario of a person who doesn't speak a word of English," Rankin said. "Typically, they are held in jails with criminal populations. They don't have access to a phone, they are extremely isolated. I'm relatively certain that he has no idea there has been this maelstrom around him."

"He just struck me as typical, normal and well-focused," he said.

Rankin said this case was unusual only because of the disguise the man wore to board the flight.

"There is some suggestion he is some sort of a wizard of disguise," Rankin said. "It appears he is an ordinary citizen of the People's Republic of China."

"Sometimes, people have their relative or family scrape all the money they can," he said.

"People have altered their appearances to look like somebody else's passport that's been given to them," Rankin said. This man's plan, he said, was "certainly clever, and apparently he was able to create the appearance of the U.S. passport holder."

The intelligence alert, dated November 1, said it was believed the man and a U.S. citizen who was born in 1955 "performed a boarding pass swap, with the subject using an Aeroplan card as identification to board the flight. As neither boarding passes nor Aeroplan cards reflect dates of birth it may not have been difficult for the very elderly looking passenger to present himself as a 55-year-old man."

However, Air Canada released a statement on Saturday stating it was "totally unfounded" that its boarding gate staff accepted an Aeroplan card as proof of identification in lieu of a passport. An Aeroplan card is used for frequent flyer miles.

"The facts relating to this passenger's acceptance on board the aircraft are still being investigated," according to the statement.

Rankin said it could be months before the man's refugee status is determined.