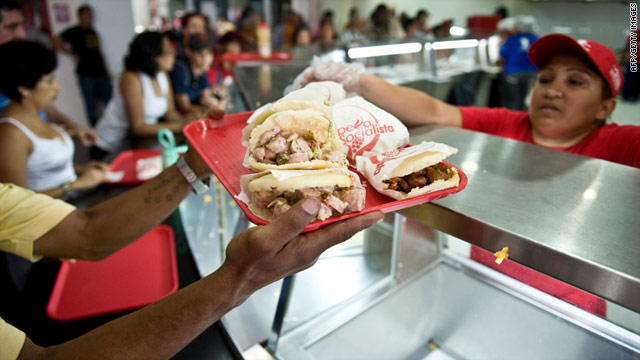 A customer buys food as others line up at an Arepera Socialista restaurant in Caracas, Venezuela.
STORY HIGHLIGHTS
RELATED TOPICS

(CNN) -- The U.S. Embassy in Caracas appears to have put in long hours examining President Hugo Chavez's efforts to build a socialist economy in Venezuela. But out of all the dense analysis springs one cable -- about the role of the humble tortilla in building a brave new world.

The cable, obtained by WikiLeaks and published on its website, starts in appetizing fashion. "President Chavez made socialism taste better with the December 22 (2009) opening of a 'socialist arepera' serving Venezuelan-style tortillas at a fraction of their usual price."

The arepa is a thick cornmeal tortilla popular in Colombia and Venezuela.

In a section titled "Socialism's Tangible -- and Tasty -- Benefits," the cable continues: "The restaurant, located in a lower middle class neighborhood of Caracas, serves 'arepas' for about a fourth of their regular price."

There follows a colorful description of the eatery, which is run by the Ministry of Commerce.

"On a January 8 visit, EmbOffs (Embassy Officers) witnessed a long line of people waiting to get into the restaurant but surprisingly rapid service. Inside, one wall was dominated by a quote in large red lettering from Simon Bolivar: "The best system of government is that which produces the greatest happiness."

The visiting diplomats were told by an employee that the restaurant served 1,200 customers per day.

The cable quotes Eduardo Saman, who was then minister of commerce, as saying that customers could rely on low prices because all the ingredients came from government-owned companies.

Saman said there was another another "key difference between socialist and capitalist arepera: customers pay only after eating," while "in fast food chains ... they only think about money." And in the arepera, he said, customers told cashiers how much they'd eaten.

Since he came to power in 1998, Chavez has extended the role of the state in major industries, nationalizing Venezuela's oil fields and much of its agricultural sector.

The state's venture into the fast-food sector involves the "Arepera Socialista" chain as part of the country's socialist market cooperatives.

The cable suggests that the introduction of the arepera is due to the president's populist instincts ahead of elections.

"Facing high inflation, electricity and water rationing, and failing public services, Chavez may see the 'Arepera Socialista' as a relatively quick and easy way to promote the benefits of 'socialism' to his electoral base before the September legislative elections."

But there's nothing to suggest the Venezuelan leader ever said, "Let them eat arepa."