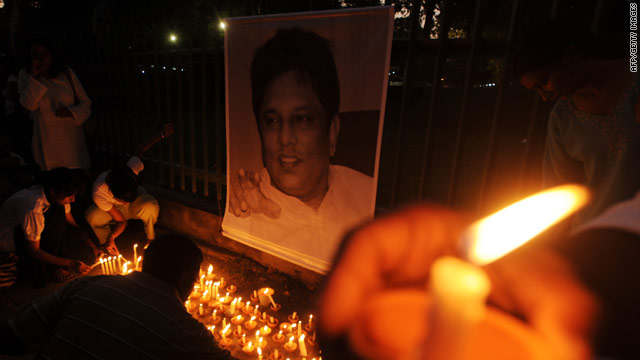 (CNN) -- A Sri Lankan journalist who was fatally shot last year has been recognized by the International Press Institute as a hero for freedom of the press, the group announced Thursday.

The institute said it is naming Lasantha Wickrematunge, who was editor of Sri Lankan newspaper The Sunday Leader, as an IPI World Press Freedom Hero.

Wickrematunge, a fierce critic of the Sri Lankan government and the Tamil Tiger militants, was shot dead near Colombo on January 8, 2009. More than a year later, the killing has not been solved, IPI said.

"The murder of Wickrematunge was a shocking reminder of the dangers facing Sri Lanka's courageous journalists, for whom death is all too often the ultimate form of censorship," IPI Director David Dadge said in a written statement.

"By naming him an IPI World Press Freedom Hero, IPI honors his memory and his sacrifice, and sends the strongest message possible to the Sri Lankan government that the international community will not forget his murder and that the perpetrators must be found and punished."

Three days after his death, The Sunday Leader published a column in which Wickrematunge had predicted his own death.

The column anticipated his killing by government forces and defended the craft of journalism in his country, which is enduring a bitter civil war.

Wickrematunge wrote that he was twice assaulted and his house was fired upon.

"Despite the government's sanctimonious assurances, there was never a serious police inquiry into the perpetrators of these attacks, and the attackers were never apprehended," he wrote in the column.

"In all of these cases, I have reason to believe the attacks were inspired by the government. When finally I am killed, it will be the government that kills me."

Asked last year about threats to journalists, Sri Lankan President Mahinda Rajapaksa voiced assurance that no journalist or media institution had cause to fear any threats or attacks by the government, according to a statement on the government's official Web site.

"The government had no interest whatever in seeking disgrace through any attacks on the media," he said, and he assured media leaders that the culprits would be captured and brought to justice, the statement said.

Wickrematunge's brother, Lal Wickrematunge -- chairman of Leader Publications Ltd., which includes The Sunday Leader -- told IPI that the slain editor had known he was in danger.

"But he continued in his journey unbowed and unafraid. He felt total commitment to his work," Lal Wickrematunge said.

Lasantha Wickrematunge's killing spurred a demonstration in Colombo by 4,000 people, which Reporters Without Borders said was the largest since Rajapaksa took power in 2005.

He was re-elected to a second term last month.

Sinhalese-dominated government forces have been working to eradicate the last vestiges of Tamil Tiger separatists in Jaffna peninsula, a rebel-held northern region. The 25-year-old civil war has left more than 65,000 people dead.

According to IPI figures, 17 journalists have been killed in Sri Lanka over the past decade. Two of them were killed in 2009.

Wickrematunge will be among 60 World Press Freedom Heroes honored in a ceremony in September, IPI said.