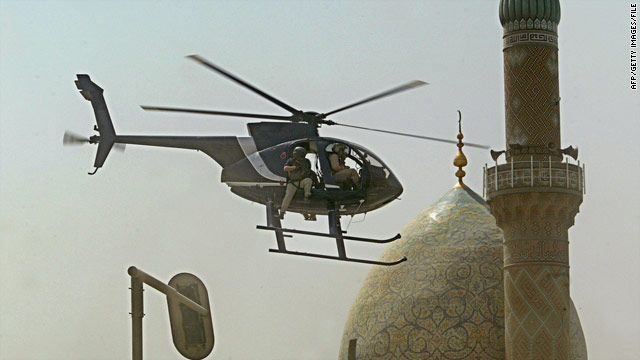 A Blackwater security firm helicopter flies low above the scene of a bomb blast near the Iranian Embassy in Baghdad in 2005.
STORY HIGHLIGHTS
RELATED TOPICS

Washington (CNN) -- Despite revelations in a congressional investigation of a subsidiary's mismanagement and questionable vetting of employees, the company formerly known as Blackwater could soon win millions of dollars in new job orders for work in Afghanistan.

A subsidiary of Xe, the new name for Blackwater, is eligible to win Department of Defense work worth tens of millions of dollars to train Afghan police, according to a Pentagon official.

Five companies were qualified to bid on the training and training-support contracts, including Raytheon, Northrop Grumman, Lockheed Martin Integrated Systems, ARINC and the U.S. Training Center.

U.S. Training Center is a subsidiary company owned by Xe.

The Pentagon contract is to be announced next month. Xe has not been officially notified whether it will be awarded the contract, according to a company spokesman.

"We have not been awarded either and have no knowledge of the status of those contracts," said Xe spokesman Mark Corallo.

An industry official told CNN that Xe made bids on two task orders under the training program, one for the actual training of Afghan police and one for logistics support for such training.

Once awarded, the new orders would be in effect until August 2012, according to a Department of Defense statement.

Since 2007, the company, then called Blackwater, has held the rights to bid against the other four companies on a pool of jobs worth as much as $15 billion.

Xe still holds numerous contracts under three company names in Afghanistan for support of military and intelligence operations. Those companies are US Training Center, Greystone and Presidential Airways.

The company has a troubled past both in Iraq and Afghanistan. It was banned from operating in Iraq by the government there after a shooting incident left Iraqi civilians dead and injured. That incident strained relations between the United States and Iraq.

In May 2009, four contractors in Kabul were involved in a shooting incident that left two Afghan civilians dead. Two of the contractors are now facing charges in the United States.

A congressional investigation found evidence that the company that hired them, a Xe subsidiary called Paravant, armed the employees despite having no permission to do so from the U.S. military. The probe also found that the company illicitly obtained the guns used in the shooting, and hundreds of others, from a stockpile of weapons meant for the use of the Afghan military and police.

On Wednesday Xe officials were called before the Senate Armed Service Committee to discuss that shooting incident.

He said one of the keys to beating the Taliban in Afghanistan is the ability of U.S. forces to win support from the Afghan people, many of whom do not distinguish between U.S. contractors and the U.S. military.

Xe Services Vice President Fred Roitz acknowledged the company's culpability in the 2009 incident in his opening statement to the panel.

In the statement, Roitz said, "the new Xe Services would act differently today. We simply will not send our personnel overseas without a proper authorization for a weapon (where needed) and without full compliance with all requirements."

He said the company has "put in place new leadership and procedures to help ensure this commitment is kept."

"We've made a lot of mistakes in both Iraq and Afghanistan. And we've tried to address those mistakes in a number of ways," Morrell said. "But as far as I know, people are being held to account for the mistakes and the violations that they have made."