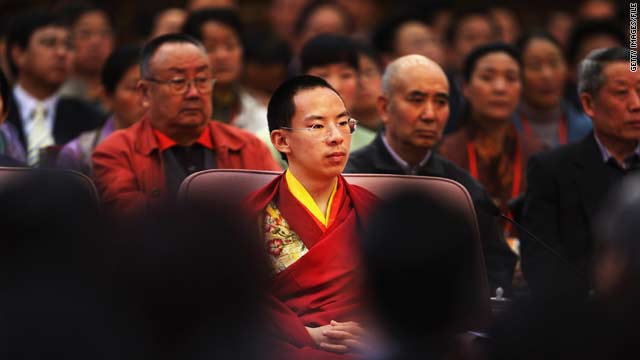 The Panchen Lama attends a government symposium in Beijing in March 2009 to mark the 50th anniversary of China's "liberation" of Tibetans.
STORY HIGHLIGHTS
RELATED TOPICS

Beijing, China (CNN) -- Until recently, he had rarely appeared in public. But now, he has been named to China's top advisory body.

The appointment of the 11th Panchen Lama, the second highest Tibetan spiritual figure, to the Chinese People's Consultative Conference is largely symbolic. But it's politically significant.

Beijing's critics, however, say that the inclusion of the Panchen Lama at the annual meeting is part of a stepped up effort to undermine the popularity of Tibet's exiled leader, the Dalai Lama.

Born Gyancain Norbu, he was handpicked by the Chinese government as the reincarnation of the Panchen Lama and has largely lived in seclusion in Beijing, tutored by Tibetan and Chinese mentors.

He now is being positioned as the representative of Tibetan Buddhism.

Last month, he was elected vice president of the Buddhist Association of China and at its recent conference, he said he "would uphold the leadership of the Communist Party of China, adhere to socialism, safeguard national reunification, strengthen ethnic unity and expand Buddhist exchanges on the basis of adherence to law and love for the nation and Buddhism," the state-run Xinhua news agency reported.

Comments like those further fueled questions of his legitimacy among Tibetans. The Dalai Lama's Web site says the Chinese-named Panchen Lama is "spurned" by most Tibetans.

The Dalai Lama, sent into exile in India after an aborted rebellion against Chinese rule, says he would like to see greater autonomy for the Tibetan people. But Beijing considers him a separatist.

In 1995, the Dalai Lama anointed another boy of the same age as Norbu, Gedhun Choekyi Nyima, as the latest reincarnation of the Panchen Lama. But he disappeared shortly afterwards.

Suspicions that the boy had been kidnapped were heightened in May 1996 when the Chinese leadership admitted to holding him and his family in "protective custody." Pro-Tibet groups labeled him as the world's youngest political prisoner.

The Panchen Lama is sure to play an important role in the future of Tibetan Buddhism -- primarily because it falls to him to choose the next reincarnation of the Dalai Lama when the incumbent, who is 75, dies.