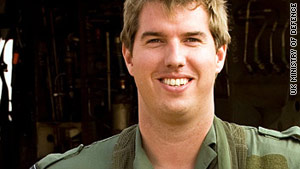 (CNN) -- Weeks after a firefight in southern Afghanistan's Helmand Province, a story has emerged of a British pilot who was struck in the head by a bullet and still managed to safely land a helicopter full of casualties, medical personnel and troops.

British TV host Mike Brewer says he was onboard the Chinook that day as Flight Lt. Ian Fortune, 28, was shot in the helmet, just above his eyes.

Brewer, who was accompanied by a cameraman, was filming a series called "Frontline Battle Machines" for the Discovery Channel and was aboard Fortune's helicopter because it is the only surviving aircraft from the Falklands War, making it the oldest serving Chinook in the fleet.

He told CNN Saturday that he expected that flight that took off about three weeks ago to be a relatively routine trip to pick up wounded Afghan soldiers.

"Instead, the Chinook "landed in a firefight," Brewer said. "There was a battle going on. On the way in we could never have imagined it would become this kind of mission."

Immediately after takeoff, the aircraft "took a big shudder," someone called "mayday, mayday" on the radio, Brewer said, adding that he heard Fortune saying he had been shot in the face.

Brewer said at this point, "I was thinking it as the end of my days, and I was about to plummet to my death." Still, Fortune was able to get the 20 or so people aboard the Chinook -- including a half-dozen injured Afghan troops -- back to Camp Bastion safely, he said.

"The aircraft controls were damaged. It was a lot of trouble to keep us in the air," Brewer said. "I spoke to the co-pilot later. He said Ian would not let go of the controls. Even with blood pouring into his eyes, he would not let go."

A spokeswoman with Britain's Ministry of Defence confirmed that Fortune's helmet was struck by a bullet in an incident in the region several weeks ago, and that he sustained minor injuries.

While she couldn't confirm the number of people aboard the helicopter, she did say Fortune landed the aircraft safely at Camp Bastion -- the main British base in Helmand province. The spokeswoman said Fortune was not speaking publicly about the incident.

The story was first reported by London, England's "The Sun" on Friday, though why it was published weeks after the incident was not immediately clear.

Brewer's documentary was originally slated to air in May, but has been rescheduled for the end of this year.

He went to Camp Bastion, the main British base in Helmand Province, as well as a police training college and a British forward operating base, or outpost, according to 10 Downing Street.