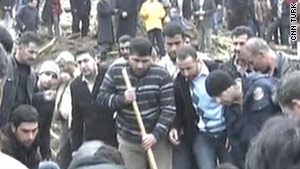 About 100 people were injured when the magnitude-5.8 earthquake struck at 4:32 a.m., according to officials.

The quake struck in Elazig province, with the village of Okcular the worst hit, according to Ozcan Yalcin, the press secretary for the province's governor.

About five hours later, a magnitude-5.5 aftershock shook the region, according to the U.S. Geological Survey. That followed at least 40 other aftershocks up to 4.4 magnitude, the prime minister's press office said.

No casualties were reported immediately after the aftershocks.

"Many houses have collapsed," the prime minister's office said.

"Search and rescue teams have been sent to the area," the prime minister's office added. The Turkish Red Crescent also is sending tents and blankets, while additional ambulances are being brought from neighboring districts.

Turkish television showed injured residents being rushed to hospitals, and paramilitary officers, police and civilians digging with shovels in the rubble of collapsed buildings.