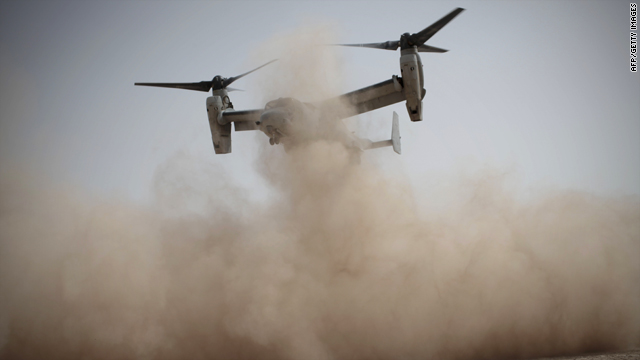 The CV-22 Osprey -- the aircraft that crashed -- is used to for long-range infiltration and resupply operations for the U.S. military.
STORY HIGHLIGHTS
RELATED TOPICS

The cause of the crash of the Air Force CV-22 Osprey was not known, said the International Security Assistance Force statement. Several other service members were injured in the crash late Thursday night.

The CV-22, which conducts long-range infiltration and resupply operations for the U.S. military, went down seven miles west of the city of Qalat, the capital of Zabul province.

Zabiullah Mujahid, spokesman for the Taliban in the region, said Taliban fighters shot down the aircraft. Another spokesman, Qari Yoseph, also claimed responsibility and said that 30 Americans had been killed.