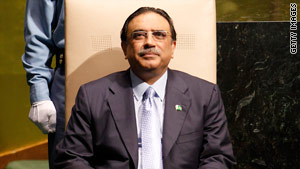 The presidential ability to dissolve parliament was first inserted into the Constitution by the 8th Amendment, enacted under Gen. Muhammad Zia-ul-Haq. It was eventually removed, but then was re-enacted by another military ruler, Gen. Pervez Musharraf, in what is known as the 17th Amendment.

"There's always been [the impression] that this country has lacked a foundational document," Almeida told CNN after the historic vote. "All the other federations have had a core document. In Pakistan, we've had this yo-yo effect. We've gone from a total presidential form of government to a parliamentary form of government."

But Almeida added that while it may appear that Zardari has weakened his hand, he still holds the cards because he remains at the helm of the country's ruling party, the Pakistan People's Party. "It's really unlikely that there will be a serious power shift in the presidency towards the prime minister's office," he said.

Nonetheless, Almeida said, while Zardari may enjoy a boost in popularity among the country's political elite for supporting the measure, his numbers aren't likely to change among the country's working class, who make the difference at the ballot box.

The amendment still needs to pass through the upper house of parliament and be signed by Zardari before becoming law. But analysts say this first hurdle was the one that mattered because the opposition doesn't have the numbers in the Senate to defeat the measure.

Police cordoned off an area to conduct a search when two of the suspected bombers hurled a hand grenade and opened fire in an engagement that lasted 40 minutes, Ayub said.

Both suspects died in the confrontation, he said. Police are still looking for the two other alleged bombers.