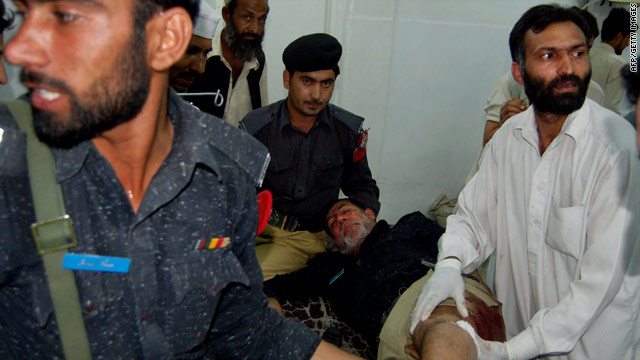 A paramedic treats an injured policeman at a hospital following a bomb blast in Peshawar on Monday.
STORY HIGHLIGHTS
RELATED TOPICS

Islamabad, Pakistan (CNN) -- At least 22 people were killed Monday and 27 were injured when an explosion ripped through a crowded market in northwestern Pakistan, police and hospital officials told CNN.

Muhammad Iqbal, spokesman for the Muslim religious party Jamaat-e-Islami, said in an appearance on Pakistan's GEO-TV that the blast took place near a demonstration by party members who were protesting increases in load shedding -- the practice of creating intentional power outages aimed at saving electricity. The country is experiencing an energy shortage.

The deputy regional chief of the party, Haji Dost Muhammad, was among those killed in the explosion, Iqbal said.

Peshawar police chief Liaqat Ali said on Pakistani TV that militants in the city "were dormant" for roughly four months.

"Now they have reorganized and regrouped and they will try to hurt us and hit us," he said. "Nonetheless we are ready and we will put in our best."

The blast at the market came after another explosion in Peshawar killed a 7-year-old and injured seven other students outside a school on Monday, authorities said.

A suicide bomber also killed three people on Sunday at a police station in Kohat -- the same northwest Pakistani town where attackers targeted a camp for displaced people and killed at least 41 a day earlier.

Kohat is a town in the North West Frontier Province where the Pakistan military has stepped up its offensive against the Taliban in recent weeks.

The fighting has caused a flood of displaced people to pour into camps. More than 250,000 people are registered as internally displaced people in the towns of Kohat and Hangu after fleeing the fighting between government troops and the Taliban in Orakzai and Kurram, two districts in the country's tribal region.