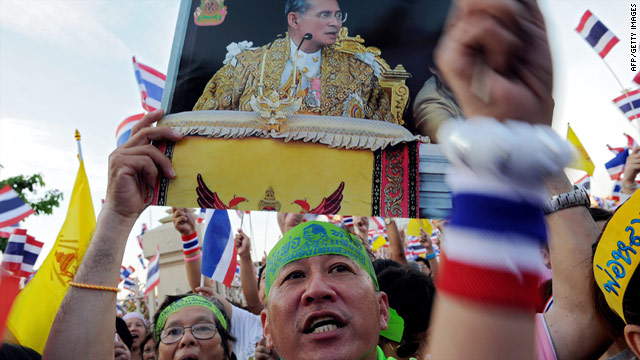 Bangkok, Thailand (CNN) -- For the first time amid the political upheaval raging in Thailand, the nation's revered king spoke out Monday, calling on new judges to help stabilize the country.

Speaking from the hospital where he has been since last year, King Bhumibol Adulyadej, 82, addressed a group of newly appointed judges.

"I would like all you to preserve honesty," he said, adding that "it will be a way to help the country to be progressing and stabilized at the same time."

He told the judges they could "be seen as model" for people who work in all sorts of jobs.

The king added that in performing their duties, the judges "would help to uphold justice and order of the country, and this is very important. If you do follow your oath strictly, it will help bring order to the country, certainly."

He was admitted to the hospital last September after complaining of fever and fatigue.

On Sunday the country's prime minister acknowledged he did not expect protesters would use weapons and apply violence toward authority.

Speaking on national television, Prime Minister Abhisit Vejjajiva made the admission a day after he rejected a call from anti-government protesters to dissolve the country's parliament in 30 days. Abhisit said other groups' political opinions must be taken into consideration before any such action is taken.

The Red Shirts have been clashing with the Thai military in a Bangkok area that serves as a financial hub. Another co-leader of the Red Shirts, Veera Muskapong, met with foreign diplomats Friday and told them he might meet with the government if it meets certain conditions.