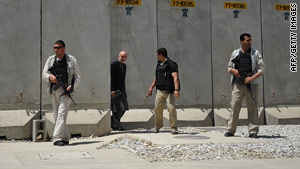 Kabul, Afghanistan (CNN) -- Seven insurgents were killed when a group of more than a dozen men launched an early morning attack on Bagram Air Base in Afghanistan on Wednesday, officials said.

Taliban spokesman Zabiullah Mujahid told CNN that 20 armed men wearing suicide vests stormed the base around 4 a.m. (7:30 p.m. Tuesday ET), with four of them detonating explosives at the entrances to allow the other men to move in. Mujahid said that a "major firefight" took place inside the base.

But Army Specialist Christina Dion, a spokeswoman who both lives an works on the base, told CNN that personnel were ordered to enter bunkers when the base came under attack and were allowed to return to their huts and tents about 90 minutes later.

"We're always prepared to deal with attacks on our base," Counts said. "The response this morning was immediate."

Another Bagram spokeswoman, Maj. Virginia McCabe, could not say if flights into and out of the air base had been stopped and said that authorities are investigating how the incident started.

"Established security procedures are in place," she said, adding that personnel with "mission-essential" responsibilities were continuing to work.

Bagram is a heavily fortified base, its perimeter guarded by high fences and thick, concrete walls. Dion said she didn't believe anyone could have made their way into the main portion of the base.

Taliban fighters have lobbed rockets into the base in previous attacks.

CNN's Adam Levine and Paula Hancocks contributed to this report.