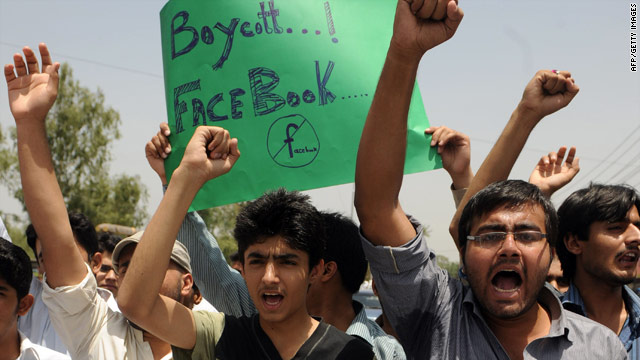 The Pakistan Telecommunication Authority issued the order a day before "Everybody Draw Mohammed Day," scheduled by a Facebook group with the same name, because of "the objectionable material" on the social networking site, said Khoram Ali Mehran of the telecommunication authority.

"We have blocked it for an indefinite amount of time. We are just following the government's instructions and the ruling of the Lahore High Court. If the government decides to unblock it then that's what we will do," he said.

The organization has not received any complaints from internet users about the blocking of Facebook so far, he said. Devout Muslims consider it offensive to depict Mohammed.

"This is meant to be in protest," said Sulpovar, who is American. "This is something I have felt strongly about for a long time: Bullying by certain Muslim groups will not be tolerated in a free country."

Sulpovar said Pakistan's decision to block Facebook was ridiculous. Her group and a similar one had attracted about 7,000 fans between them Wednesday. Groups opposing the idea had about 68,000.

A spokesman for the Council on American-Islamic Relations said the idea behind the group was offensive.

"Islam discourages any visual representations of the prophets of God -- Jesus, Moses, Mohammed, anybody -- because we believe it can lead to a form of idol worship," Ibrahim Hooper said. "The majority of Muslims worldwide object to any representation of a prophet of God."

"Islam is not above criticism or cartoons. I believe in equality, and censoring Mohammed while we can draw every other figure in the world does not equal equality," she said.