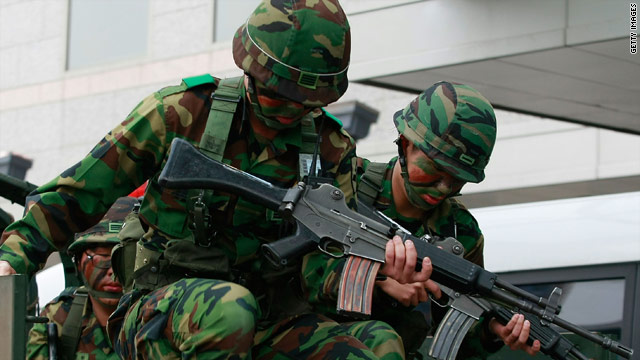 South Korean soldiers participate in a drill against possible threats from North Korea in Seoul on May 28.
STORY HIGHLIGHTS

(CNN) -- A North Korean official has questioned South Korea's credibility for its rhetoric and actions over the sinking of a South Korean warship in March, state-run media in North Korea reported Saturday.

Maj. Gen. Pak Rim Su lashed out against the South for saying the North Koreans sank the Cheonan warship, a claim fiercely denied by his communist government. He said the evidence produced by South Korea to make its claim has been fabricated.

He said South Korea has aggravated what has become a grave situation, and he warned that any accidental confrontation between the countries would result in war, according to an article in the state-run Korean Central News Agency. He cited North Korea's "nuclear deterrent" to deal with such situations.

Pak spoke at a rare press conference from the country on Friday. He addressed Korean and foreign reporters and representatives of military attaches at foreign embassies and international organizations, the North Korean news agency reported.

China, Japan and South Korea plan to discuss the warship's sinking this weekend. Chinese Premier Wen Jiabao has that his country will not defend whoever is responsible for sinking the South Korean warship. He also said that China is not ready to accept South Korea's conclusion that the North is to blame.

He said that the involvement of the United States shows that the probe couldn't be objective.

Pak said people who disagreed with the investigators' assertions were expelled from the investigation team. He said the changes in investigation results as the case moved forward cast suspicion on the review, according to the state-run news agency's account.

The North Koreans say the South is attempting to undermine efforts to promote reconciliation and North Korea's progress. They argue that the claim has served to rally conservative forces in South Korea and help them politically in upcoming elections.