Thai prime minister says state of emergency may be lifted 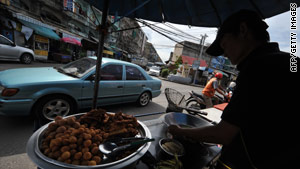 The streets of Bangkok are getting back to normal after weeks of unrest.
STORY HIGHLIGHTS
RELATED TOPICS

In his weekly television address, Abhisit said the state of emergency could be lifted, but did not say when a relaxation or removal of emergency regulations would take place, the Thai News Agency reported.

Officials implemented the state of emergency on April 7 in Bangkok and nearby provinces, when thousands of anti-government protesters had amassed in the capital's central shopping district. They imposed a curfew in Bangkok and 23 provinces May 19.

Violent clashes between the demonstrators and government troops broke out earlier this month, killing at least 50 people and injuring nearly 400, government officials said.

Abhisit said an independent committee would be established this week to examine the political unrest.

A Thai court issued an arrest warrant for Thaksin this week on terrorism charges connected to the clashes, the news agency said.

Thaksin has denied he was a leader of the Red Shirt demonstrations and said the charges in the arrest warrant show the government lacks legitimacy.