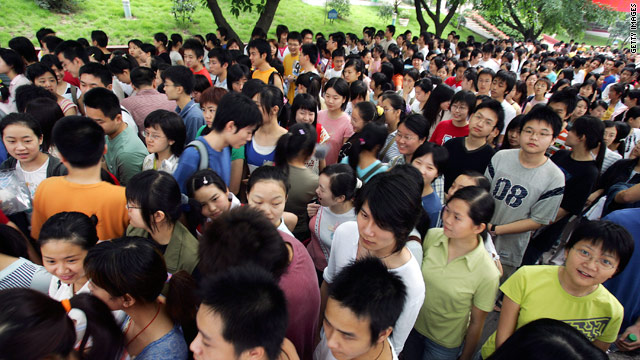 Beijing, China (CNN) -- Li Yuning, a high school senior in China's eastern Shandong province, hopes to explore a career in advertising or journalism. But to get into a university to pursue this path, she must first run the gauntlet known as "Gaokao," a grueling university entrance examination given every summer across the Asian nation.

For millions of young Chinese, education is their only ticket to success and upward mobility. That is why Gaokao is serious business.

On the eve of the exams, high school students cram, parents fret and nutritionists offer advice on what examinees should eat to stimulate their brain and improve their chances of passing the test.

Police monitor the Internet and the exam venues, looking for test-related scams. In the past few years, there have been well-publicized reports of attempted cheating, and police have arrested 64 people suspected of "selling high tech devices to help students cheat," according to Chinese state-run Xinhua news agency.

"It was okay," she said afterward. "But when I entered the examination room, I could feel my hands sweating."

Typically, examinees like Li are tested on Chinese literature, mathematics and English. Those who want to major in arts also field questions on history, politics and geography, while those who wish to major in sciences take tests on chemistry, biology and physics.

There are essay-type questions, too. For the Chinese literature test, for example, examinees are asked to write an essay on a generic theme. They are encouraged to write their personal opinions and show off their creativity and literary skills.

Some provinces and cities came up with their own topics rather than using the nationally-approved one, including these:

- Beijing: "Looking up at the star-filled sky, standing on solid ground."

- Guangdong: "Being your neighbor."

This year, 9.57 million people took the exam, 650,000 less than last year, according to state media, China News Service. Only about 68 percent of this year's test-takers expect acceptance letters.

Though no formal documents say that Gaokao is a continuation of China's ancient imperial examination system, many people think Gaokao is an evolution of this old tradition of selecting talents through exams.

People over 25 years old used to be barred from taking the exams, but that regulation was rescinded in 2001, so now anyone may take the tests as many times as they wish.

Many parents say the results should not determine a youth's future. Fan Yi, director of Ningbo University's foreign language school, agreed. Three years, ago, Fan, who is also a delegate to China's national legislature, submitted a bill proposing the abolition of Gaokao.

"A lot of graduate students do not know why they want to study at this university and why they take their majors, and they have no idea how they should proceed. That's because the examination system does not allow independent thinking," he told local media.

Fan proposed an alternative: evaluate college applicants based on their aptitude for logical thinking, languages, ability to solve problems, plus their record of community and volunteer services -- more along the lines of the education system in other countries.

But the majority of Chinese seem to think that the current system is more acceptable as a lesser evil to the power of money and connections. Some netizens say Gaokao is among the few things in China that is relatively fair.

If it is abolished, some argue, the college recruitment will become corrupted and unfair. Those who have money or power will get into famous universities, while those who don't will live an even more helpless life.

Some netizens propose that China adopt varied approaches to recruit college students instead of solely depending on Gaokao.

In the past year, universities like Peking University and Tsinghua have started recruiting a small number of outstanding high school graduates based on their general aptitude and after-school activities. Some were admitted based on recommendations by high school principals and on interviews before Gaokao.

Li, who will have to wait for two more weeks before she finds out her test results, said she had considered studying college overseas to escape Gaokao. But she is now philosophical about her experience.

"After going through it I feel quite happy now," she said. "I think Gaokao is a very good training -- not as a test of my academic studies, but of my mental toughness. Next time when I have to take exams again, I will be not be freaked out."