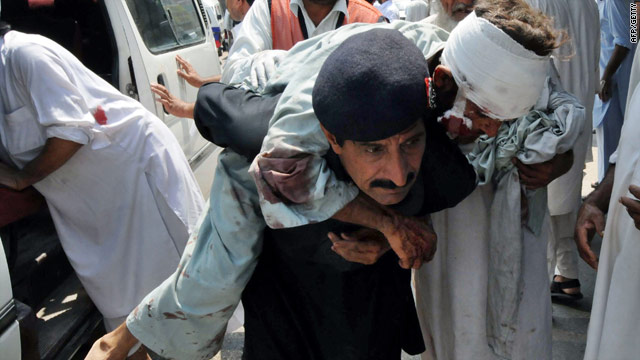 A security guard outside a hospital in Peshawar helps an injured victim of the suicide bombing on Friday.
STORY HIGHLIGHTS

Islamabad, Pakistan (CNN) -- A suicide car bomber killed at least 56 people and wounded more than 100 others Friday when his vehicle exploded in a market in Mohmand Agency in Pakistan's tribal region, officials said.

The intended target of the attack was a local government office in the town of Eakah. But the vehicle detonated in a market near the building, said Hayat Khan, a local administration official.

About 20 shops, five houses and the local jail were damaged in the blast.

Authorities also believe more victims may be trapped under the rubble of damaged buildings.

Mohmand is one of seven semiautonomous tribal agencies along the 1,500-mile border porous border that Pakistan shares with Afghanistan.

The Pakistani military has been battling insurgents in the area for some time.