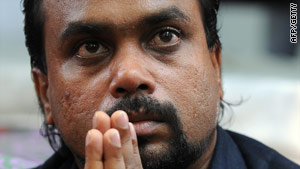 Former Sri Lankan Cabinet minister Wimal Weerawansa has said he is prepared to "fast unto death".

Colombo, Sri Lanka (CNN) -- A Sri Lankan Cabinet minister on a "fast unto death" to protest a U.N. human rights panel announced Friday that he had resigned his post as his supporters marched in Colombo carrying placards condemning the world body.

Crowds carrying portraits of former minister Wimal Weerawansa marched to the Russian Embassy to seek Moscow's help in stopping the United Nations from probing alleged war crimes. They handed a memorandum to that effect to an embassy official.

Police said the about 200 people carried placards condemning the U.N. move and shouting slogans against Secretary General Ban Ki-moon. Organizers said a similar request will be made to the Chinese Embassy.

Meanwhile, several nations expressed dismay at the blockade of the U.N. compound and Weerawansa's leading role.

"Peaceful protest is part of any democracy, but blocking access to the United Nations -- of which Sri Lanka itself is a member -- as well as intimidating and harassing U.N. personnel is a breach of international norms and harmful to Sri Lanka's reputation in the world," said a statement from the United States, Germany, France, Italy, Britain, Switzerland, the Netherlands, Romania, Norway and the European Union.

"We call upon the government of Sri Lanka to take all appropriate steps to ensure the safety and security of U.N. personnel and premises," it said.

Weerawansa continued his fast for a second day, rejecting warnings from a doctor to drink water or risk affecting his kidneys. He said he would go without food until Ban dissolves a three-member panel that is looking into human rights abuses in the final stages of a decades-long war that ended in 2009 between the government and the Tamil Tiger rebels.

The United Nations has been concerned about accountability issues related to the rebels' defeat, including alleged war crimes by troops and rebels -- allegations that both parties deny.

"Ban's move is intended to bring President Mahinda Rajapaksa before a war crimes tribunal. We will not allow that to happen," Weerawansa told a news conference earlier in the week.

Weerawansa's Cabinet colleagues visited him at a special tent outside the U.N. compound in Colombo. He lay on a mattress on a specially-constructed dais protected by plain-clothed security. Visits by ministers signalled government backing for Weerawansa's protest against the United Nations.

External affairs minister, G.L. Peiris, defended the protest in Parliament. He said it "is in conformity with the law" and added that the government has no right to suppress peaceful demonstrations who are entitled to democratic rights.