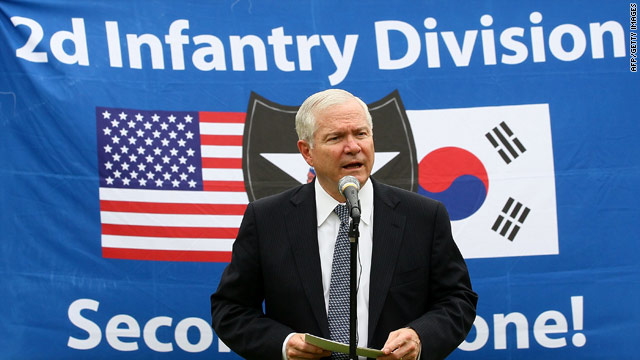 The exercise, dubbed "Invincible Spirit," will involve about 8,000 Army, Air Force and Navy personnel, 20 ships and 200 aircraft, the military said.

The purpose of the training is to improve readiness against a "range of threats" facing South Korea, the military said in a statement. The four-day exercise will be the first in a series planned in the Sea of Japan.

He and Secretary of State Hillary Clinton plan to visit the demilitarized zone between North and South Korea on Wednesday.

He said the United States wanted to make "a gesture of solidarity with our Korean allies and [show] recognition that the issues of missile and nuclear proliferation in the North continue to be serious challenges for us and for our allies and we intend to take them seriously."

The exercises come amid months of heightened tensions on the Korean peninsula after the sinking of the South Korean warship Cheonan in March. A multinational investigation found North Korea responsible for the torpedo attack that killed 46 South Korean sailors. North Korea has denied any connection with the attack and said it is the victim of an international conspiracy.

Earlier this month, the United Nations formally denounced the Cheonan's sinking, but did not specifically mention North Korea.

The United States is sending the aircraft carrier USS George Washington and three U.S. destroyers to South Korea to participate in the drill.

Pyongyang over the weekend said such a U.S. presence would be a "reckless provocation," according to the state-run Korean Central News Agency. It said the United States and South Korea were trying to save face after suffering a "diplomatic defeat" in the United Nations.

North and South Korea fought a war from 1950 to 1953, which ended in an armistice, not a peace treaty, meaning the two nations are still technically at war. About 28,500 U.S. troops are stationed in South Korea.