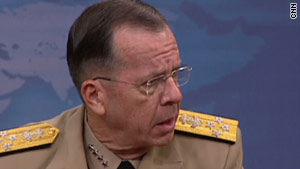 Mullen is on a 10-day trip meeting with military and government leaders around the world, according to a statement on the Joint Chiefs of Staff website.

Speaking to reporters Friday in New Delhi, India, Mullen noted that the Pakistani militant group Lashkar-e-Taiba was a growing threat.

"We're all increasingly concerned about its capability, its aspirations, and that's one of the reasons that we have to work so hard with each other as well as with Pakistan," he said, according to a transcript of his remarks posted on the Joint Chiefs of Staff website. "And it's an issue that I raise very consistently in my meetings with leadership in Pakistan. And I will again when I meet with them again."

India blames the group for a number of terrorist strikes in the country, including the 2008 Mumbai attacks that left more than 160 people dead, and Mullen said Friday that the group's influence was spreading.

In a news briefing at the beginning of his trip last week, which included stops in South Korea and India, Mullen said that he had been to the region on many occasions. But he noted that this week's visit comes at "a really critical time."

"We are working to re-establish a trust with Pakistan which was virtually eliminated when we stopped our relationship with them in 1990," Mullen said in Friday's news briefing.