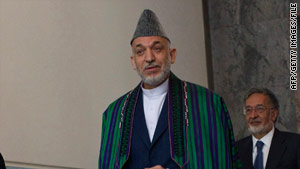 NATO says there is no evidence of casualties beyond insurgents.

A joint investigation by the NATO-led International Security Assistance Force and the Afghan government is underway, according to an ISAF spokesman.

"Any speculation at this point of an alleged civilian casualty in Rigi Village is completely unfounded," said Rear Adm. Greg Smith. "We are conducting a thorough joint investigation with our Afghan partners and will report any and all findings when known."

An ISAF statement said a joint operation occurred 10 kilometers (6 miles) south of Rigi, and that international and Afghan forces came under attack by machine guns and rocket-propelled grenades. Coalition forces responded with helicopter fire and precision-guided missiles against the insurgents.

ISAF said "all fires were observed and accounted for and struck the intended target," and that six insurgents -- including a Taliban commander -- were killed in the strike. The information was verified by "ground observation and intelligence sources."