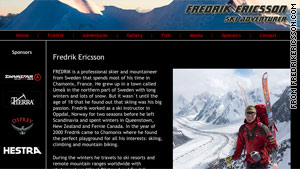 Professional skier Fredrik Ericsson was attempting to become the first man to ski from the summit to base camp.
STORY HIGHLIGHTS
RELATED TOPICS

The incident occurred between 7 a.m. and 8 a.m. as Ericsson was attempting to become the first man to ski from the summit to base camp, said Schipper, who said he learned of the accident on the world's second-tallest peak in a satellite call from fellow climber Fabrizio Zangrilli.

Ericsson, in his mid-30s, was at a place called the bottleneck, at an altitude of around 8,300 meters (27,231 feet), between Camp 4 (8,000 meters) and the summit (8,611 meters), said Schipper, a Moab, Utah-based climber. He described the bottleneck as a "steep and narrow section with thousands of meters of exposure below."

Ericsson, along with his climbing partners Trey Cook and Gerlinde Kaltenbrunner, had begun the summit push between 1 a.m. and 1:30 a.m. in low-visibility weather.

After several hours of climbing, they approached the bottom of the bottleneck. At this point, Cook returned to Camp 4, leaving Kaltenbrunner and Ericsson to continue their ascent.

As Ericsson was attempting to fix ropes to the snow and ice along the route he "lost his purchase and was unable to arrest his fall," Schipper said.

Ericsson's body, resting at about 7,000 meters, will remain where it fell, Schipper said on Ericsson's website.

"His parents have requested it remain in the mountains he loved," he wrote. "Retrieval would be exceptionally dangerous."