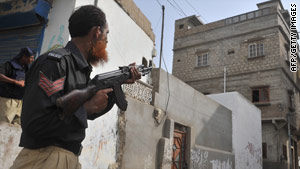 A policeman stands guard in a troubled eastern neighbourhood of Karachi on August 4, 2010.
STORY HIGHLIGHTS

Islamabad, Pakistan (CNN) -- The death toll rose to 81 on Friday in the widespread violence that broke out after the killing of a provincial lawmaker in southern Pakistan.

Syed Raza Haider, a leader of the MQM party, was shot Monday evening at a mosque in the southern Pakistani port city of Karachi.

Haider was attending the funeral of a relative, Gul said. The gunman also killed the politician's bodyguard.

The politician's death triggered political and ethnic violence in the city, as mobs set fire to vehicles and gunfire erupted.