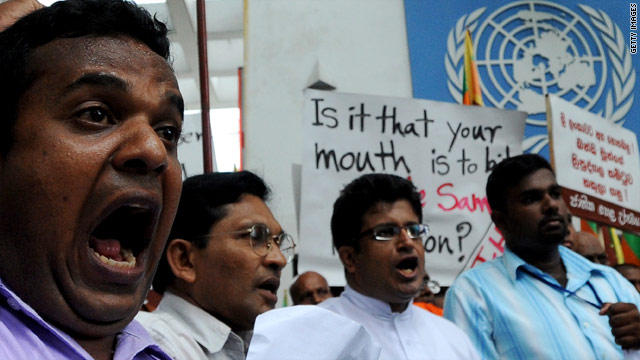 Sri Lankans protest outside the U.N. office in Colombo on June 28, 2010, against the naming of a U.N. panel to investigate possible war crimes committed during the final months of the conflict with the Tamil Tiger rebels.
STORY HIGHLIGHTS

Colombo, Sri Lanka (CNN) -- A protest at the U.N. compound and a cabinet minister's three-day "fast unto death" has not deterred U.N. Secretary-General Ban Ki-moon from proceeding with a probe into alleged war crimes in Sri Lanka.

Meanwhile, the government, which denies the war crimes' allegations, has redoubled its efforts to stymie the move -- through negotiations with the opposition and working with the West.

The final phase of the military campaign last year to defeat the Tamil Tiger rebels, who fought a two and half-decades-long bloody separatist war, is shrouded in controversy. Local and international media were barred access to the battle zones.

Ban has appointed a three-member expert panel to advise him on the way forward. They have four months to accomplish the task.

Human rights groups have alleged that both troops and rebels violated humanitarian laws and thousands of innocent civilians were killed.

Among those who voiced concerns were officials from the United States and the United Kingdom. However, Sri Lanka's President Mahinda Rajapaksa has said, "Not one civilian was shot dead by our troops." Tamil Tiger rebels have also denied the allegations.

Sri Lanka also insists that a Lessons Learnt and Reconciliation Commission appointed by Rajapaksa would be sufficient.

Worst hit will be the apparel industry. Apparel industrialists fear that cutbacks in production as a result of the ban would force them to retrench labor or even shut down factories.

Rohan Masakorala, chairman of Sri Lanka's Joint Apparel Exporters Forum, said the loss for the current year will be between $300 million and $500 million.

The EU had sought a written commitment from the government before July 1 that 15 EU conditions would be carried out. Those include a demand, in accordance with the constitution, that "independent and impartial appointments to key public positions, is fully safeguarded."

This demand extends to a "Constitutional Council which adequately reflects the interests of all political, ethnic and religious groups and minorities within the Sri Lankan society."

The EU also called for the repeal of remaining 2005 emergency regulations, the adoption and prompt implementation of a national human rights action plan, and sought to "ensure journalists can exercise their professional duties without harassment."

The government at first rejected the EU demands, with External Affairs Minister, Professor G.L. Peiris, saying they infringed upon Sri Lanka's sovereignty and are therefore "not negotiable."

However, he recently met EU envoy Bernard Savage for talks. An External Affairs Ministry statement said, "A dialogue is the only way forward." Though the remarks suggested a possible shift in stance, Sri Lankan officials declined further comment.

Savage told CNN that "there is still no indication to us from the government how they intend to proceed." He said the EU decided on February 15 of this year to suspend tariff concessions from August 15. "This ban will come into force. There is no change," he added.

"This will definitely have an impact not only on the apparel sector but on value-added agricultural and industrial exports to the EU," said Nisthar.

Cassim, editor of the Colombo-based Financial Times. "More than the concessions, it is the profile of the country that is at stake."

Analysts say the EU withdrawal and the consequent cutbacks in production would force factories to close leaving thousands out of employment.

The United States has also said it would review trade preferences extended to Sri Lanka. A statement by the U.S. Embassy in Colombo said that the AFL-CIO, the largest labor organization in the United States, filed a petition with the U.S. government requesting "a review of worker rights" for a second time after its first effort failed in 2008. It has been accepted, and there will be a public hearing, likely in August, the embassy said.

The US Assistant Trade Representative for South and Central Asia, Michael Delaney, recently led a delegation to Sri Lanka for talks. He told a news conference at the end of his visit that "discussions between all stakeholders including government official, trade unions and companies had been progressive and positive," but declined to give any specifics.

Fears of international isolation, particularly by the West, appear to have weighed on President Rajapaksa, said Ameen Izzadeen, an international affairs commentator for newspapers in Sri Lanka, including the privately-owned English-language Daily Mirror.

Rajapaksa abandoned plans to amend the constitution to allow contesting office as president for more than the current two terms. Instead, he recently invited Ranil Wickremesinghe, leader of the opposition, for talks on constitutional reform. Wickremesinghe heads the right-wing United National Party, which has the second largest majority in parliament.

"Recent international events have a bearing on the talks we are holding," Wickremesinghe said.

He said he had agreed with Rajapaksa on abolishing the executive presidency, which some critics have said vests too much power in the president, and instead creating an office of executive prime minister -- but it's not clear yet what power that office would have.

Wickremesinghe's party leaders were continuing a dialogue with their counterparts in the government on other constitutional changes, noting that he did not rule out his party's co-operation "in the national interest" if its own proposals were heeded.

"Rajapaksa can then have Wickremesinghe, a favorite of the West, on board to mend fences with the international community," Izzadeen said. "The opposition leader is liked by the West and the EU. However, Rajapaksa will have to accept the opposition party's views on some contentious issues in the constitutional reforms, which is no easy task."

Basil Rajapaksa, senior presidential advisor, minister of economic development and brother to the president, said: "We have accomplished a major task -- defeat terrorism that has plagued the country for almost three decades. If there are any misconceptions or misgivings with our friends, we see no difficulty in ironing them out."