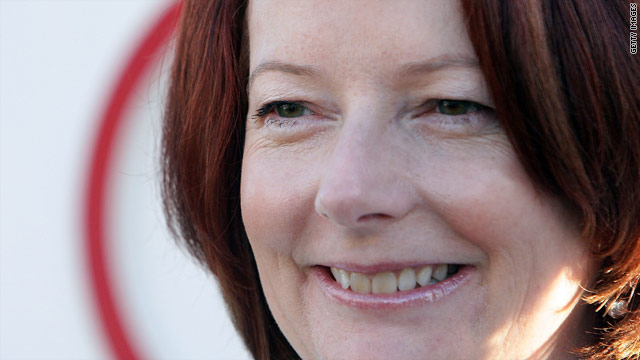 Gillard said the country has a "deep affection" for Queen Elizabeth, but that she favors moving Australia toward a republic.

"What I would like to see as prime minister is that we work our way through to an agreement on a model for the republic, but I think that the appropriate time for this nation to move to being a republic is when we see the monarch change," Gillard said at a news conference.

Australia is currently a constitutional monarchy with the British monarch as its head of state.

Gillard made the comments on the campaign trail ahead of Saturday's general election, in which she faces a challenge from opposition leader Tony Abbott.

Abbott said Tuesday he believes the current system of government is a good one.

"This republican cause has been with us for a long time, but the Australian people have demonstrated themselves to be remarkably attached to institutions that work," he said Tuesday.

"I think that our existing constitutional arrangements have worked well in the past. I see no reason whatsoever why they can't continue to work well in the future. So while there may very well be further episodes of republicanism in this country, I am far from certain that, at least in our lifetimes, there is likely to be any significant change."

Abbott, of the Liberal Party, headed Australians for Constitutional Monarchy for two years before entering Parliament.

Gillard ousted Kevin Rudd as leader of Australia's Labor Party, and prime minister, in June. She had been Rudd's deputy prime minister, but Labor Party members of Parliament voted her into the top job as Rudd's public approval declined.