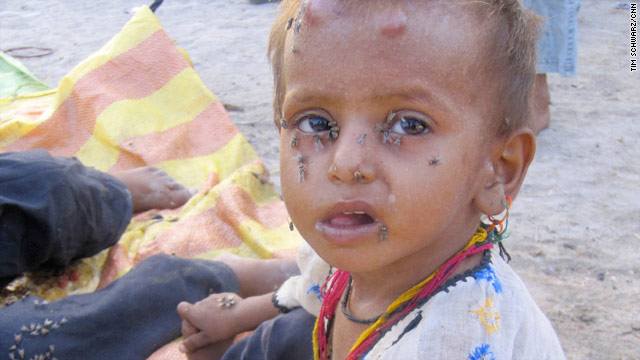 Flies cover a child at a school turned into a camp for flood victims in Sukkur, Pakistan.
STORY HIGHLIGHTS

Sukkur, Pakistan (CNN) -- The elderly women pushed their way through the crowd of refugees to the blond woman walking through the camp in Sukkur, Pakistan. They surrounded the foreigner, aid worker Claire Sanford. One of the women clasped her hands together and began to beg.

"We need food, we need food," she cried, her face wrinkled with the hard years of poverty. "We haven't eaten today. We walked a long, long way. No men are with us. We are all widows. For God's sake, give us something."

Sanford is used to this. She has been an aid worker in the wake of disasters like the 2004 Asian tsunami and the 2005 Pakistan earthquake. But this disaster is particularly difficult, she said.

"This is what's really hard: The number of women and especially children affected by this disaster -- they are the most vulnerable and have been disproportionately affected," said Sanford, who works for Save the Children.

The death toll has been far lower in Pakistan's historic floods compared to the other disasters Sanford has seen. But the scope of the devastation and the effect on an estimated 6 million people is massive, she said.

It's a sentiment shared by the United Nations Office for the Coordination of Humanitarian Affairs. Spokesman Maurizio Giuliano told CNN in Pakistan: "The floods are outrunning our relief efforts. We move faster and faster, but the finish line keeps moving further ahead. This is turning out to be a marathon, not a sprint, but a marathon at sprint pace."

At the Sukkur camp, a mother handed Sanford her daughter, a girl so small that she looked like a premature baby. The girl was 6 days old.

What once was a school is now a refugee camp for 2,000 people. A medical tent drew a constant line. One toddler, crying and in pain from diarrhea, sat down in front of a doctor. The physician explained to the mother how to give the child rehydration salts. As soon as they finished, another child with a flood-related skin illness sat down.

"It's a constant queue," Sanford said.

She has been here for three weeks, since the first flooding hit Pakistan. The disaster has gotten worse, not better, despite hundreds of millions of dollars pledged around the globe.

"Remember back to Hurricane Katrina, when the American government was so overwhelmed," Sanford said. "Think of it as being 10 times bigger than that at the moment. This is one of the biggest disasters the world has seen and it does require an unprecedented response."

But the response has been slow. Pakistan's disaster has lacked the immediacy and dramatic rescues of other recent disasters like the Haiti earthquake. Perhaps as a result, it has failed so far to win the large outpouring of support that came after the quake.

For aid workers, it has been overwhelming and frustrating to not have enough to meet people's needs. If the absence of clean food and water continues, preventable illnesses, like diarrhea, will claim the lives of innumerable children, she said.

Can the international community make a difference?

"Yes, they can. More money, more support, the ability to deliver this aid."