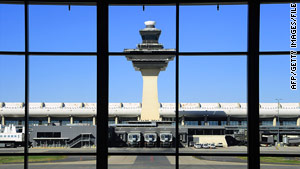 A nine-member military delegation from Pakistan was asked to leave a plane at Dulles International Airport.
STORY HIGHLIGHTS
RELATED TOPICS

The nine-member delegation, including brigadier generals and at least one two-star navy admiral, were bound for a meeting at the U.S. military's Central Command at MacDill Air Force Base in Tampa, Florida.

After they boarded a United Airlines flight in Washington on Monday en route to Tampa, a passenger on the flight expressed to the flight crew a concern about one of the members of the Pakistani delegation, according to the Pakistani official, who spoke to CNN but asked not to be identified. The delegation was escorted from the plane, the official said.

After some discussion, United Airlines agents sought to book the group on a flight the next day, the Pakistani official said. But the officers, after consulting with their commanders in Pakistan, decided to return home instead, in protest.

A spokeswoman from United Airlines declined to describe the airline's version of the incident, or respond to a claim in the Pakistani media that the officers were treated "like terrorists."

The airline said in a statement, "We recognize the inconvenience this caused, and we have apologized."

It was unclear whether the delegation was ever detained.

Contacted by CNN, a Transportation Security Administration spokesman said no one from that agency ever interacted with the Pakistani delegation. The Metropolitan Washington Airports Authority did not return CNN's phone calls.

The planned meeting was described by a Central Command spokesman as an annual military "consultative committee" meeting, to coordinate security initiatives. CentCom hopes the meeting can be rescheduled, said Maj. David Nevers.

"It was an unfortunate incident involving the airline," said Pentagon spokesman Col. David Lapan. He said the incident did not directly involve the Department of Defense and, "There's been no official DoD apology."

In March, a delegation of Pakistani lawmakers said they were skipping a trip from Washington to New Orleans, Louisiana, rather than submit to the full-body scan they said airport screeners required of them. They were hailed as heroes in Pakistani media when they returned home.