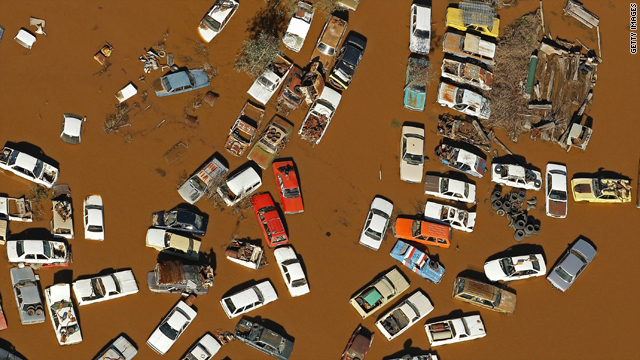 Cars sit deep in the floodwater on Monday in Wangaratta, Australia.
STORY HIGHLIGHTS

"We can't force people to leave, but we are urging them to seek shelter," said State Emergency Service spokeswoman Susan Frayers. Rain has poured in the southeastern state of Victoria, sending evacuees to government shelters, as well as the homes of family and friends on safer ground.

No deaths or significant injuries have been reported as a result of the flooding, but property damage and recovery efforts will easily reach millions of dollars, Frayers said. The full extent of damage has not been measured as crews continue to investigate.

The State Emergency Service has received more than 3,800 requests for help from community members, its website said. Flood warnings have been issued for about two dozen rivers across the state. Many roads have flooded, and drivers have been urged to avoid driving through standing water.

The communities affected include Benalla, Clunes, Creswich, Horsham, Murchison, Myrtleford, Shepparton, Skipton, Wangaratta. Some of those are rural communities, where crops have been destroyed.

Rain had eased by late afternoon Monday in the capital, Melbourne.

Scattered showers, with possible hail and thunder, were forecast there for the rest of the day, according to the Australian government's Bureau of Meteorology.