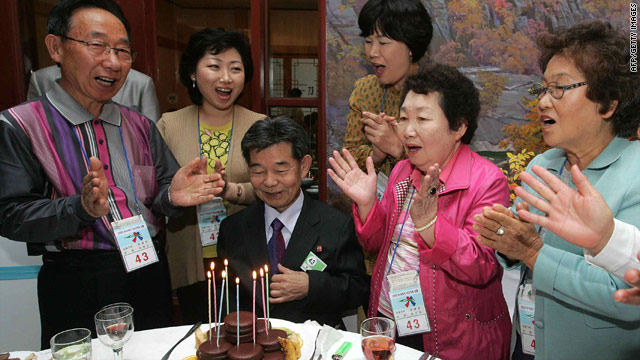 (CNN) -- A North Korean official is reaching out to South Korea in an attempt to once again reunite separated families, state media reported Saturday.

According to Korean Central News Agency of North Korea, Jang Jae On, chairman of North Korea's Central Committee of the Red Cross Society, sent a notice Friday to Ryu Jong Ha, president of the South Korean Red Cross, proposing the countries work to arrange a reunion of separated families and their relatives at Mount Kumgang resort in North Korea.

The proposed reunion would take place around the fall harvest holiday of Chuseok, which falls on September 22 this year, the Yonhap news agency said.

Millions of families were separated by the Korean War, which ended in 1953 with a cease-fire and no formal peace treaty.

Family members wept as they saw one another for the first time in decades. No mail, telephone or e-mail exchanges existed between ordinary citizens across the Korean border.

Yoon Ki-Dal, 88, of South Korea thought such a moment would never come. After leaving his son and daughters when they were babies during the Korean War, he was able to hold the hands of his North Korean children last September.

"Father, we thought you were dead," his daughter, who was in her 60s, told him, her face trembling.

Jang expressed "hope that humanitarian cooperation between the north and the south would get brisk with the reunion of separated families and their relatives at Mt. Kumgang resort," KCNA reported Saturday.