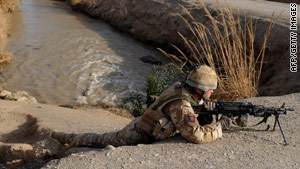 Kabul, Afghanistan (CNN) -- British forces in southern Afghanistan have handed responsibility for security in the Sangin district of Helmand province to the U.S. Marines, the British and American militaries said Monday.

British forces have been in Sangin since 2006.

The transfer of authority was first announced by the British defense secretary in July.

It follows heavy British losses in the area, a Taliban stronghold. The British sustained 105 casualties in Sangin -- roughly a third of all British deaths in the country, according to Lt. Campbell Spencer, a spokesman for the International Security Assistance Force.

British Defence Secretary Liam Fox acknowledged that "the level of sacrifice has been high" in praising the British mission in "one of the most challenging areas of Afghanistan."

Campbell described the militants in the area as "very skillful, very organized (and) very difficult to combat," adding that the Taliban is "very well entrenched" in Helmand province.

NATO's International Security Assistance Force said the handover was possible because of the increase in the number of U.S. troops in Afghanistan.

Sahrai said that under British control the security situation worsened, adding that residents are waiting to see whether security improves under U.S. control.

"They are waiting to see if the Americans can create security, job facilities, opening schools and investment on reconstruction projects," Sahrai said.

The switch of command in Sangin is not a defeat for British troops, but simply works well militarily, said Michael Clarke, director of the Royal United Services Institute, an independent defense and security think tank in London.

"It never made much military sense to put troops into the northern areas of Sangin, Musa Qala and Kajacki in the first place," Clarke said in July when Fox announced the plan.

"But in 2006 they were sent there at the insistence of [Afghan] President [Hamid] Karzai, and once established, any pullback would have represented a victory for the Taliban."

With the arrival of some 18,000 U.S. Marines in the region by the end of August, it makes sense for the British troops to reorganize themselves and reinforce their numbers in central Helmand, Clarke said.

It will make the British force more effective and safer, he said.

The political fallout of the move, however, is unpredictable, Clarke said.

When the Brits ended operations in the southern Iraqi city of Basra last year, it was under similar circumstances, but still appeared as a "furtive retreat," he said.

"The image at home that Britain was giving up a job it could no longer handle was impossible to shake off," Clarke said. "The same may attach to Sangin. This war is as much about image and perception as it is about who controls the ground in Afghanistan."

Spencer emphasized Monday that the handover "is in no way the British backing away from Sangin. It's the redeployment of forces."

CNN's Melissa Gray and Ivan Watson contributed to this report.