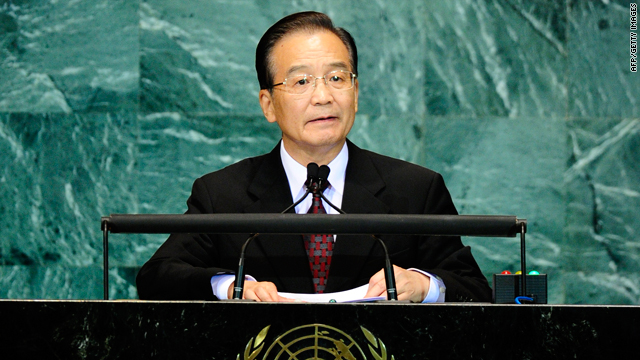 (CNN) -- While China's premier called on leaders gathered at the United Nations to work with "a greater sense of urgency and responsibility" to support the world's developing countries, he also laid out plans for China to make major contributions to struggling nations.

"Developed countries should fulfill in good faith their commitments, assume the main responsibility in assisting developing countries," Wen Jiabao said in his address to the Millennium Development Goals Summit on Wednesday.

Wen urged the "rich nations" to provide financial assistance and said that the aid "should be selfless and have no strings attached."

Laying out China's part in the international initiative, Wen announced his nation would donate $14 million in the next three years to fight AIDS, tuberculosis and malaria and also to reduce and cancel the debts of the least developed countries.

On the subject of poverty, Wen spoke of his country's progress. "China has made tireless efforts to reach MDGs (Millennium Development Goals). Since 1978 the number of Chinese living in absolute poverty has lowered by 200 million," he said.

Wen reflected on the widespread effects of the global economic crisis, numerous natural disasters and other hardships facing the countries already in dire straits, making the achievement of the development goals all the more difficult.

Absent from the Chinese premier's speech Wednesday was any mention of the release of a Chinese boat captain held in Japan, which he commented about Tuesday night by calling for the captain's immediate release. The Chinese government cut off high-level talks with Japan on coal and increased commercial flights between the countries, after Japanese patrol officers arrested a captain and crew of a Chinese fishing boat earlier this month near the disputed islands in the East China Sea.

Wen was scheduled to give a speech at the Waldorf Astoria hotel in Manhattan Wednesday night, hosted by the U.S.-China Business Council. On Thursday, he will meet with President Barack Obama in the morning in bilateral talks at the United Nations.