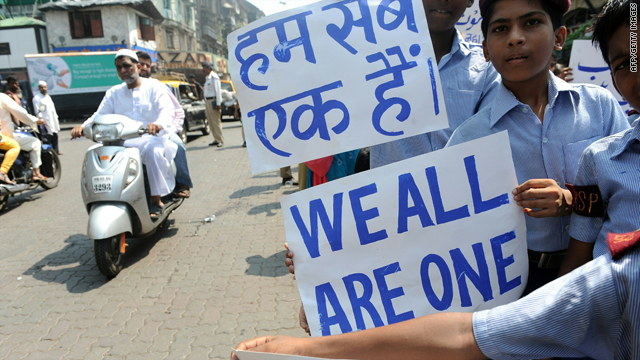 Schoolchildren in Mumbai, India, on Monday call for calm and peace on the eve of the long-awaited Ayodhya ruling.
STORY HIGHLIGHTS
RELATED TOPICS

(CNN) -- A court in India is set to rule soon on who owns a small patch of land in Uttar Pradesh, up in the north -- and India is on high alert waiting for the result.

That's because that little patch of land, in a town called Ayodhya, has been sparking religious violence for hundreds of years.

Thousands of people have died in riots across India in the last 20 years over what will stand there -- a Muslim mosque or a Hindu temple.

India's Supreme Court on Tuesday lifted an interim stay on a lawsuit at the center of the case, and the Allahabad High Court is expected to deliver a verdict on September 30, according to CNN-IBN.

Hindus -- the majority in India -- traditionally believe that Ayodhya is the birthplace of Lord Rama, one of that religion's most revered deities. Ayodhya is one of the Hindus' seven sacred cities.

But in the 1500s, the town became part of the Mughal Empire.

A mosque was built in 1528 by the first Mughal emperor, Babur, on the site where Hindus believe Lord Rama was born.

Hindus tried to tear down the Babri Mosque in 1990. They failed, but the mere attempt caused riots that brought down India's government.

Two years later, they tried again and succeeded, pulling apart the 464-year-old mosque with crowbars, other hand tools -- or just their bare hands.

Riots broke out across the country, with Hindus and Muslims targeting each others' holy buildings. More than 2,000 people died in that round of violence.

It was among the worst sectarian bloodletting in the country since India and Pakistan became independent in 1947.