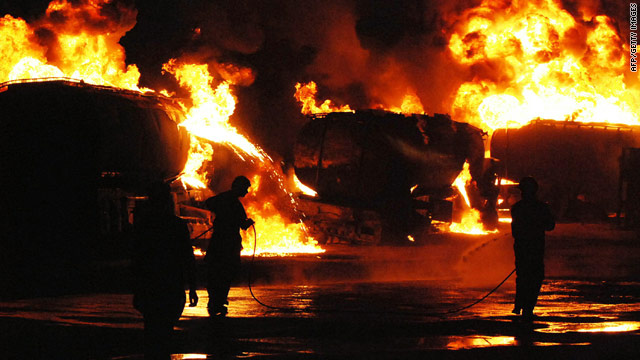 Militants torched dozens of supply trucks in the southern Pakistani province of Sindh Friday morning, police said. No one was hurt, but 25 of 27 trucks were damaged, officials said.

Saeed Ahmed, a senior police official in the Khuzdar district of Baluchistan, said the truck was apparently separated from a convoy heading to Afghanistan.

The Friday morning attack took place in the Shikarpur district when four militants used fire crackers and petrol bombs to damage the trucks, said Muhammad Hanif, a senior police official in the district.

The trucks carry crude, diesel and petrol for NATO troops in Afghanistan.

Meanwhile, NATO convoys were still barred Friday from going into Afghanistan through the Torkham Gate checkpoint.

The supply route to Afghanistan has been closed by the Pakistani government after fighting that led to the deaths of three Pakistani soldiers, and a military spokesman said Thursday that United States is hopeful the situation is only temporary.

"We don't think it's a very serious problem," Dorrian said. "It's a throroughfare we use a lot so it is significant. But we can work around it."

Torkham Gate is one of the main ports of entry for material coming into the war zone. But it is not the only way of getting supplies in. Khyber Agency is one of the seven districts in Pakistan's tribal region.

About half the cargo that flows into Afghanistan comes in via one of the two gates from Pakistan, the Defense Department says.

Another 30 percent uses two major routes through Kazakhstan and Uzbekistan, one via Russia and the other via the Caucasus. The remaining 20 percent -- mostly sensitive items like weapons, ammunition and other critical equipment -- comes in by air.

CNN's Frederik Pleitgen and Nasir Habib contributed to this report.