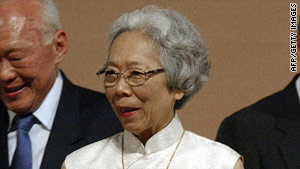 (CNN) -- The wife of Singapore's first prime minister died at her home Saturday at the age of 89.

A private funeral for Kwa Geok Choo will take place next Wednesday, the prime minister's office said in a statement.

She was married to Lee Kuan Yew, who is widely credited with molding Singapore into one of the world's most prosperous countries.

Lee, 87, was the founding father of the island nation. His son, Lee Hsien Loong, is now Singapore's prime minister -- the country's third since it gained independence from Malaysia in 1965.